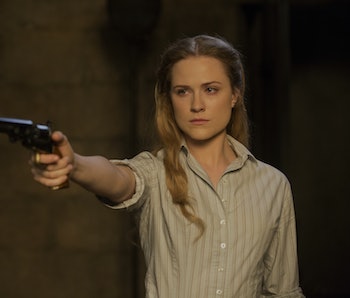 Violent delights don’t have violent ends. They just have new beginnings. A strange, bizarre new teaser for the second season of HBO’s Westworld has surfaced online, ahead of the full trailer set to air during the Super Bowl on Sunday. (Go Eagles.) In it, an unknown person is asking for help, possibly alluding to the hostile takeover of the park as seen in the first season finale.

On Friday, the Westworld Twitter “glitched” a code, as well as a video of Westworld computers being overridden. “If you can see this message,” reads a text from an “Unknown User.” “Please get help.”

That’s when the computer glitches, and suddenly a user identified as Charlotte Hale — Tessa Thompson’s character who forcefully retired Anthony Hopkins’s Ford — reassures that “all is well.”

“Ford took it in stride,” Charlotte Hale, or someone identifying as her, confirms. “Restructuring/management downsizing on track.” Eerie.

There’s also confirmation that “Journey Into Night,” Ford’s final narrative that he announced in undeniably glorious fashion, has been implemented successfully. In the Season 1 finale, “Journey Into Night” turned out to be the awoken sentience of the park’s android hosts kept in cold storage. It was Ford’s master plan, coming full circle to how he originally engineered Dolores (Evan Rachel Wood) to kill his business partner, whereas now Dolores willingly kills Ford on her own accord. It’s free will, engineered.

The madness doesn’t end there, however. In the tweet, there is a link to that internal Delos portal, which has been around for awhile but is still fun to poke around. If you haven’t seen it yet, the site is a treasure trove of Easter eggs and extra material that makes Westworld feel alive.

It’s got all kinds of stuff, like a downloadable PDF of the Delos Corporate Guidebook — complete with bloodstains and warning messages in Sharpie — to employee emails that range from inter-department pranks, employees “experimenting” with the hosts, marketing trying to figure out press releases, and someone from Host Manufacturing creating “a beer bong out of a horse stomach.” It’s the same kind of viral marketing that was in vogue in the late 2000s, but it’s still fun to poke around.

Westworld will return to HBO in spring 2018. A trailer will air during Super Bowl LII this Sunday on NBC.