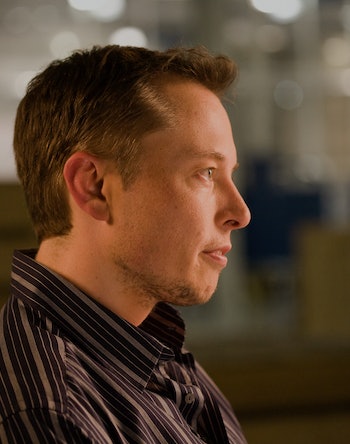 Elon Musk has, by any reasonable standard, done well for himself. And if the billionaire CEO of SpaceX, Tesla, and the Boring Company can realize his lofty ambitions — whether it’s sending humans to Mars, bringing self-driving electric cars to the masses, or helping build a whole new transportation infrastructure with the hyperloop — then he has a chance to do well for humanity too. For now, his companies have already proved commercial spaceflight is viable, sold a quarter-million electric cars, and introduced solar power technology that is already assisting Puerto Rico’s post-hurricane recovery.

But all of Musk’s staggering success up to this point is built on what is frankly an equally staggering amount of failure, and whatever future success he has will likely be accompanied by still more failure. Throughout his career, he has shown a knack from learning from those setbacks and emerging stronger from them.

Here are three times Elon Musk has failed harder than you ever will — and how he emerged better for the experience.

3. He once couldn’t get a CEO job to save his life

In 1995, a then 24-year-old Musk and his brother Kimbal founded what would become Zip2, their first company. Though it underwent some serious evolution in its early days, Zip2 found its greatest success by helping Bay Area newspapers adapt to the unfamiliar online terrain by providing customizable guides to their cities.

Pretty much every account describes the young Musk as equal parts driven and hard-driving, combative, and totally committed — when Musk himself mentions Zip2 today, it’s usually in the context of him and his brother saving money by sleeping in the office and showering in the nearby YMCA instead of getting an apartment. This was also a Musk who had not yet learned the value of failure, as biographer Ashlee Vance reports in Elon Musk: Tesla, SpaceX, and the Quest for a Fantastic Future.

“My mentality is that of a samurai,” Musk said to a venture capitalist. “I would rather commit seppuku than fail.”

When Zip2 began attracting serious investors, they took one look at this version of Elon Musk and his desperate desire to be CEO and said, in a word, “Nah.” He was instead made the company’s chief technology officer, with no ultimate control of the company’s vision. Even when the board’s chosen CEO oversaw a costly, botched merger, Musk’s demands to at last be given the job fell on deaf ears. Instead, he was stripped of his own role as chairman, further isolated from any actual power.

For all the success Musk has since had as CEO of Tesla and SpaceX — and let’s not forget PayPal, even if the circumstances of his ouster there were their own brand of ludicrous — it’s hard to fault the board too much. Musk’s idea of leadership in the 1990s was, per Vance’s book, to stay late and rewrite the code of his engineering team, believing them all to be incompetent. He failed to see until later how publicly berating an employee for an error might make them less productive (to say nothing of, you know, the psychological harm that might do). As Musk relates to Vance, his time at Zip2 made him realize management had to actually mean working with people.

The idea of Zip2 was good enough for Compaq to buy the company in 1999 for $307 million, with Musk receiving $22 million of that. It was enough for him to take a more serious first step toward his next company, and all the ones after, but it was his failure to get put in charge — and his realization of why that really would have been as bad an idea as everyone else believed — that would serve him best in the long run.

“I would rather commit seppuku than fail.”

2. He has crashed a great many rockets

More than a decade after his time at Zip2, Musk had made his at times larger-than-life reputation on the work of his two companies, Tesla and SpaceX. By this point, he had learned the value of failure.

“There’s a silly notion that failure’s not an option at NASA,” Musk said in a 2015 interview about SpaceX. “Failure is an option here. If things are not failing, you are not innovating enough.”

There’s room to quibble with some of the details of that sentiment — the line “Failure is not an option” was meant to encapsulate the indomitable spirit that saw NASA bring the Apollo 13 astronauts safely back to Earth after disaster struck, after all — but Musk’s career serves as ample proof that the first step to success is a whole bunch of failure.

Consider, for example, when SpaceX spent 16 months trying to prove it was possible to land one of its rockets on its oceangoing recovery droneships. The first attempt took place on January 10, 2015. It was decently successful, actually, as the company demonstrated the levels of precision control it would need to get the rocket to within mere yards of landing on the ship. The key phrase there is “within mere yards.”

It wasn’t until April 8, 2016, that the company managed the first of three consecutive successful landings on the droneship. The try in June for four in a row ended with the rocket in flames, but SpaceX engineer Kate Tice might as well have been been speaking for Musk when she offered this take on the failure: “Important thing to keep in mind is that we did receive a lot of really good data from this. As always, these are experimental attempts, and, although we can say that Falcon 9 was lost in this attempt, we did get a lot of really valuable data from it.”

As this video SpaceX released this year makes so, so clear, Musk and company have had so many opportunities to collect valuable data.

1. He can never, ever deliver cars on time

This is a failure that Musk is very much still in the process of learning from. While SpaceX’s rockets have achieved remarkable reliability — all rocket launches attempted landings this year have been successful — Musk’s other company has struggled to achieve his goal of mass producing electric cars.

Tesla announced this week that it has begun inviting regular reservation holders to customize and order their Model 3 cars. This was initially promised to start a month ago, but was delayed as the company deals with production difficulties.

Tesla revealed at the beginning of October that it built just 260 Model 3 vehicles in the third quarter of 2017, instead of the promised 1,500, with pretty much no chance of making the originally claimed 5,000 by the end of the year — that production rate has been pushed to March. Tesla now faces at least one lawsuit from shareholders arguing the company hid these problems from investors.

What Musk calls “production hell” has gotten so bad he has taken to camping out overnight on the roof of the Gigafactory just to stay on site — a callback to the office-sleeping of his Zip2 days.

The thing is, this isn’t the first time this has happened. Consider its predecessor, the Model X,, which was revealed in 2015. Shipments were initially expected to begin in 2013, yet the very first cars didn’t ship until late 2015.

Tesla generally remains cagey when explaining why it fails to meet deadlines, though technical issues reportedly included the battery’s range, the falcon-wing doors, and more.

The problems didn’t end once the cars began shipping in 2015, though, as the following year saw low Model X delivery numbers because of what Tesla called severe shortages in supplier parts. There was, though, a deeper reason, as a statement put out in April 2016 argued for a more Shakespearean fault, namely “Tesla’s hubris in adding far too much new technology to the Model X in version 1.”

And perhaps that’s at the root of all these stories of Musk’s failures. It’s one thing to believe in yourself so much that you refuse to believe it’s possible for you to fail — that might well have been the young Musk of Zip2.

But it’s something far more to believe so completely that no matter how hard you fail, there’s always bigger success up ahead, and that the only way to get there is to relish every moment of that at times agonizing, humiliating failure.

Musk’s whole ethos is like that old cliche about reaching for the moon, because even if you miss you’ll land among the stars. He’s just one of the few people who has remembered that the stars are actually a lot farther and a lot more fascinating.