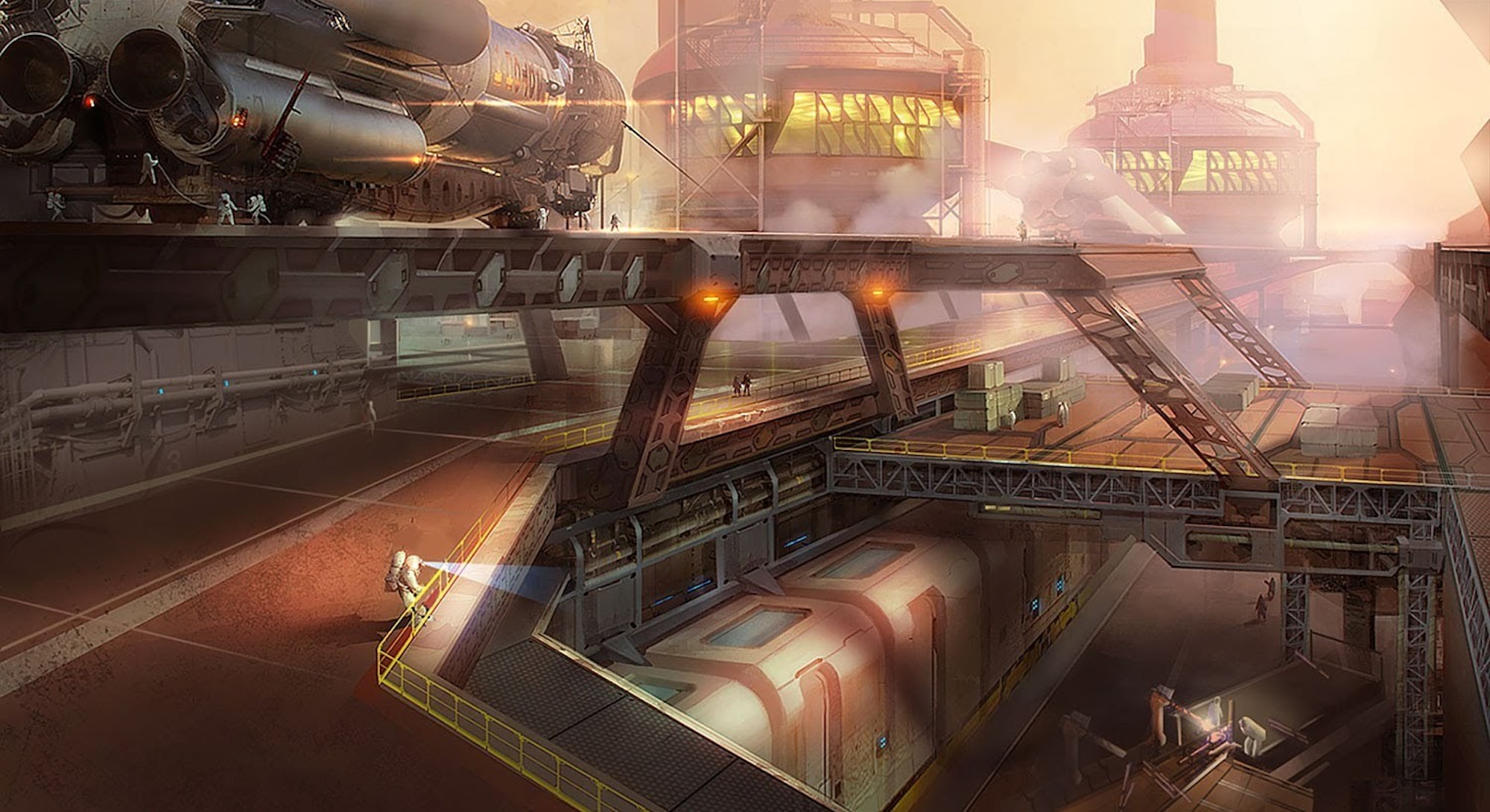 Getting astronauts to Mars will be far from a cakewalk. In order to safely land a crewed ship on the surface of the red planet, the agency needs to invent things that don’t yet exist. And we’re not talking about just one or two or five new gadgets. NASA is working on a staggering 40 new technologies in order to meet a 2033 deadline for launching a crew to Mars that can live on the planet for at least a few months.

Yes, Thomas Edison was awarded thousands of patents, but the man wasn’t trying to get human beings to safely land on the surface of another world sitting 33.8 million miles away, separated by a cold, eternal vacuum. Each of those 40 technologies is a hell of a lot more complex than a light bulb.

Stephen Jurczyk, the associate administrator of NASA’s Space Technology Mission Directorate, is the person in charge of making sure NASA’s engineers stay on task and get these technologies ready on time. He seems optimistic NASA can pull off a trip to Mars, but he says the agency just needs to remain flexible while moving forward. “This is a tremendous challenge, and we absolutely can do this,” he tells Inverse.

Here’s the NASA-Mars punch-list as of spring 2017:

This refers to robotically refueling a spacecraft in orbital space, instead of forcing vehicles to load up on propellant on the ground and expend more energy carrying it out into deep space for the entire trip.

Basically, autonomous technology that can work more effectively and accurately.

Hey there, it’s the Space Launch System, aka the once and future most powerful rocket in the world.

Part of making heavy-lift rocket systems like aforementioned SLS work is to construct them out of lightweight materials which are still robust enough to carry payloads beyond our atmosphere. Some of these haven’t even been invented yet, but they’ll need to be if NASA and the rest of the world want to make trips to Mars more than just a one-and-done project.

The tools and instruments available to Mission Control to help run the mission from the ground.

There’s plenty of excitement for how fabrication techniques like 3D printing in orbit could revolutionize the space industry and make operations in orbit much less expensive.

A catch-all phrase that basically refers to “better tech.”

When we talk about propellant transfer, we’re not just talking about in minuscule amounts. There’s a concerted effort to create viable refueling depots that service all kinds vehicles in orbit. Basically, gas stations in space.

In order to make deep space travel sustainable, we need novel forms of propulsion that don’t rely on chemical propellant. Nuclear electric propulsion has been on NASA’s to-do list for a while now.

Because astronauts don’t like to be cold in space.

Storing propellant in tanks requires temperature control as well. Cryogenic tanks are often used to get the job done, but even slight shifts in temperature could have enormous impacts on the pressure of those tanks and make them prime for bursting open. Near zero boil-off tank (ZBOT) technology, according to NASA, “uses an experimental fluid to test active heat removal and forced jet mixing as alternative means for controlling tank pressure for volatile fluids.”

One idea for making space travel more sustainable isn’t to straight-up ditch chemical propellants, but to begin using compounds more easily manufactured in space. Liquid oxygen (LOX) and methane are two kinds of propellants that could be easier to make using materials from asteroids and other planets. SpaceX, for instance, plans to do just that on Mars.

Another boost to deep space travel could be solar sail technology — using the sun’s energy to propel spacecraft to great distances and great speeds through an ultra-thin, photon-powered material.

This is just a fancier way of saying “better engines.”

Engines are a pretty expensive and time-consuming thing to build and test right now. Finding ways to reduce those costs would go a long way towards making spaceflight cheaper for everyone.

At the Humans to Mars Summit, Jurczyk mentioned the need find a suitable method of entry into the Martian atmosphere, descending down onto the ground, and making a soft, safe landing. A crewed spacecraft landing on Mars will probably weigh about 20 metric tons — over 20 times the mass of the Curiosity rover when it landed on Mars in 2012. Jurczyk was pretty blunt that landing on Mars was the most anxious problem his team is currently facing.

As related to entry, descent, and landing. This means building a spacecraft capable of making into the Martian atmosphere without burning up, and one that can slow down fast enough to keep from crashing into the ground.

Another vague phrase that refers to more novel methods for making the entry, descent, and landing process safer and smoother.

This specifically refers to the instruments key to ensuring the spacecraft currently knows where it is, what altitude it currently resides in, and what steps need to be taken to ensure a safe landing.

Supersonic retro-propulsion looks to be the key to making a landing on Mars work. That’s how SpaceX plans to get people on Mars, and NASA is keenly partnering with the company during its Red Dragon mission to see if the technology is viable.

As the crewed spacecraft uses its instruments to collect all of the data during its descent into Mars, it also projects what exactly should happen based on that information. Those models are critical for the crew to ensure they are on a safe path down to the ground.

Base camp for the crew will already have been built by the time they land on the surface of the red planet. The mission will not go as planned unless they within a walkable vicinity of that infrastructure. They should be able to land no more than 50 meters away.

This doesn’t refer to a specific system, but rather an ability to implement A.I. technology in most or all of the kinds of vehicles, tools, buildings, and equipment NASA astronauts will be using when they are working, living, and traveling on Mars.

The crew on Mars won’t have the luxury of multiple cell towers to help augment their communications with one another. NASA will be building maybe one or two pieces of equipment intended to really those messages back and forth — and it will need to be powerful enough to help facilitate chat over long distance, in the face of disturbances caused by the weather or other anomalies.

Good houses on Mars. Maybe they will be made of ice, but more likely they’ll look like something not too dissimilar from what we already use to house people in Antarctica.

Mars doesn’t possess the abundance of food and fresh water we’re used to here on Earth. We’ll need to find ways to recycle water and waste as effectively as possible to maximize every resource as much as possible.

Don’t expect the initial round of surface infrastructure to utilize a high degree of solar power. “We don’t think solar power is going to be viable” on the surface of Mars, Jurczyk said at the recent Humans to Mars summit in Washington, D.C. Instead, NASA is looking at a version of nuclear power to generate enough electricity for its first outpost. It’s not what you might expect, given how we saw Matt Damon dragging around a ton of solar panels everywhere in The Martian. But yeah, nuclear is the way we’re going to go on Mars.

We’re talking about spacesuits here. NASA is already running into problems with how to create better spacesuits for future red planet astronauts — those people will need something a little more flexible than what they’re used to if they’re going to be walking around building new structures, conducting scientific experiments, and more. Moreover, those suits will also need to come with a better system for letting astronauts poop on the go. For real.

We still don’t have a really good solution for protecting ourselves from space radiation. Jurczyk says NASA is trying to get past this problem by solving two birds with one stone. “We’re working on propulsion to allow more rapid transit to Mars,” he said, which would limit the amount of time the crew is exposed to cosmic radiation in space. Exactly what that will look like is unclear, but NASA needs to develop something that’s halfway sustainable if it wants to reduce the need to haul around large amounts of chemical fuel to and from Mars. Apart from that, NASA needs to develop better forms of shielding to protect the spacecraft anyway. Right now, we’re looking at a six-month trip to the red planet. Active shielding — technologies that concertedly work to ward off high energy events from the spacecraft’s surroundings — “ are way too massive and take too much power,” said Jurczyk. Instead, all NASA can do is develop better materials that can line the outside of the craft while remaining lightweight. That’s a tricky balance.

Deep space communication will not be easy to facilitate. In order to make it possible for humans on Mars to talk to Mission Control quickly and easily, we’ll need to develop better ways to shoot messages back and forth. Part of this is in the equipment itself, yes — but the other half has to do with the software itself.

But again, half the equation for deep space communication has to do with the instruments. NASA needs to make more powerful instruments — plain and simple.

This has to do with solar power, which may not be used on the surface of Mars as currently envisioned, but will still be the primary way NASA intends to power orbital equipment.

The vacuum of space as well as the surface of Mars are cold as hell. Technology needs to be made to work at these incredibly frigid temperatures.

Wherever we go, we’ll need more novel ways to conduct scientific study. We won’t always be able to create research systems catered to a single world. It might be necessary to create platforms that are adaptable to all kinds of environments.

We’ll need to create an energy source that is beyond anything we’ve ever dreamed of.

So that’s it, 40 technologies that NASA’s working on right now to get us to Mars. At least the project has funding.