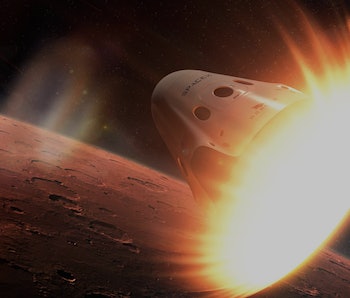 The front-runners for putting humans on Mars are NASA and SpaceX; everyone else is far behind. But if the official line from both parties is there is no competition between them, the success of whoever gets to Mars first benefits everyone. From NASA’s perspective, this is exactly one of the major goals behind the “Journey to Mars.”

There’s more truth to that than you might think, because in some respects, NASA and SpaceX need one-another in order to get to Mars. And after that, NASA will need more help from others — commercial and international partners alike — to establish an even more robust presence throughout the solar system.

William Gerstenmaier, associate administrator for the Human Exploration and Operations Directorate at NASA, described it best as “a challenge that requires all of us.”

At the Humans to Mars Summit in Washington, D.C. on Tuesday, Stephen Jurczyk, the associate administrator of NASA’s Space Technology Mission Directorate, explained that in order for agency to get the most bang for its buck, it needs to take advantage of what other players are doing.

When it comes to testing different technologies critical to Mars, Jurczyk said NASA is “paying zero in launch costs, and we’re leveraging other missions” to test these things out, he said. One key cog in that strategy is the administration’s commitment to collaborating on SpaceX’s Red Dragon missions.

Red Dragon vehicle will be launched to Mars and attempt to land on the surface. The first few of these missions will be uncrewed, but the company is looking to send a small crew to Mars aboard the Dragon by 2025 or 2026.

That’s several years before NASA’s plans for getting a crew to Mars by 2033. But allowing SpaceX to beat the agency to the red planet may, in fact, benefit NASA in the long run.

Getting to Mars will be “a tremendous challenge, and we absolutely can do this,” said Jurczyk, “but it’s all hands on deck.” He points to the fact that NASA is providing aid to SpaceX’s Red Dragon teams in the form of expertise, engineering support (especially when it comes to deep space communications), and access to simulation tools to plan out the mission. In return, NASA is getting all the Red Dragon data relevant to entry, descent, and landing that the spacecraft will accrue.

This is especially critical considering that Red Dragon will be using supersonic retropropulsion (SRP) to get down on the surface of the planet safely. It’s worth noting that SRP hasn’t been used before and SpaceX’s mission is basically the first test to see how it could be used to help get approximately 20 metric tons onto the ground without crashing (by comparison, the Curiosity rover weighed about 20 times less).

Entry, descent, and landing is probably the biggest challenge for any mission to Mars, said Jurczyk. By working alongside SpaceX and trading support for data with one another, each party can better refine its approach to the surface and take in a bigger share of one another’s successes.

Thomas Zurbuchen, the head of NASA’s Science Mission Directorate, observed that 10 years ago, companies like SpaceX would never have had a stage like the Humans to Mars Summit to discuss their work. Nowadays, they are looked to as leaders in spaceflight, just like NASA.

“If we’re not partnering with these companies, we’re missing the boat,” Zurbuchen said.

NASA is also working to ensure the architecture it builds for deep space exploration is accessible to all who are interested. That was the reasoning behind installing the new International Docking Standard for the space station. Gerstenmaier mentioned the agency is looking to create open standards for more types of infrastructure as well, such as communications instruments and colony installations on the surface of other planets and moons. We need to “avoid locking down a [single] kind of architecture,” said Jurczyk.

All in all, don’t expect NASA or SpaceX to anoint themselves king of the space hill when either of them get to Mars. As stated by Gerstenmaier, it’s not about credit or headlines, but “how do we move forward as a team,” in a way that benefits all of society, for all sorts of space endeavors. “The key thing is: don’t get locked into a linear, monolithic mission.”

More like this
Science
5.13.2022 6:00 PM
Once a year, we get closer to NASA's Voyagers — here's why
By Elizabeth Howell
Science
5.17.2022 8:45 PM
NASA announces the end of its Marsquake-hunting lander
By Doris Elín Urrutia
Science
14 hours ago
NASA InSight shutting down and more: Understand the world through 9 images
By Robin Bea
Related Tags
Share: