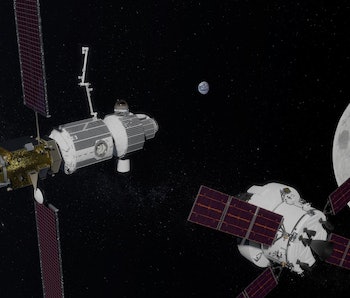 NASA’s goal for sending people to Mars has always been equal parts ambitious, and equal parts unclear. The agency’s “Journey to Mars” plan was a general illustration of broad milestones that needed to be achieved in order to get to the red planet successfully, but there is not much in the way of details — and that’s made it incredibly hard for most people to get behind NASA’s plan.

Last week, however, NASA finally delivered some specific details behind the type of technologies that will be essential not just to getting to Mars, but allowing humans to create a permanent presence out in cis-lunar space (the region between the moon and Earth), and facilitate the the ability to travel out into more deep space worlds as the century moves forward.

Meet the Deep Space Gateway and the Deep Space Transport: two architectures that NASA intends to utilize as in order to send crews out into farther regions of the solar system. During last week’s meeting of the NASA Advisory Council, William Gerstenmaier, the associate administrator for human exploration and operations (HEO) at NASA, outlined what the DSG and DST are supposed to be, and how — combined with the Orion spacecraft and extremely powerful Space Launch System — they’re supposed to give deep spaceflight for astronauts a incredible boost forward in the next several decades.

“It’s not a single program nor a single mission,” Gersetenmaier told the NAC attendees. “It’s an infrastructure we can use…it’s essentially a framework anyone can use.”

That last part is key: what NASA is trying to do with the DSG and DST is not just further its own deep space exploration aims, but also help further the ambitions of its international and private sector partners, like the European Space Agency and SpaceX. NASA isn’t simply creating a system for itself, but for the rest of the world — be they nations, private entities, or some hybrid of those two worlds.

The DSG is the first major piece of space infrastructure NASA is planning to build and make operational. It would essentially act as a habitation module from which missions beyond the moon could be prepped. Spacecraft would be able to dock with DSG — which would be capable of housing four astronauts when docked with Orion (though given its smaller size, these stints would be shorter in length than those aboard the International Space Station) — and refuel and replenish their resources for the journey ahead. The DSG would be capable of moving throughout cis-lunar space (or even perhaps into lunar orbit itself) and put spacecraft in a better position to reach their destination.

The DSG’s construction would be a key focus of many of the agency’s Exploration Mission (EM) operations, which will launch fly the Orion spacecraft into deep space using the SLS. Construction would occur in cis-lunar space, probably quite close to the moon (though not in the latter’s orbit itself). According to Gerstenmaier, NASA would expect about three different SLS launches to fully construct the gateway: EM-2 (expected to be launched in 2023) would deliver a 40kW power and propulsion system first, and a crew of four astronauts would spend one to three weeks setting it up as the core part from which the rest of the DSG would be built around.

EM-3 and EM-4 would then deliver the habitation module and logistical equipment, respectively, to have the entire DSG fully assembled. EM-5 and others would bring airlocks and other facilities to allow the DSG to actually house astronauts onboard. Other commercial flights may also be contracted to bring aboard other instruments. Overall, the DSG should be operational by around 2026, if all things go well.

Though they possess similar names, the DST and DSG are two separate architectures. The DST is basically a 41-ton spacecraft that would really make deep space travel possible. It would possess a habitation module able to provide astronauts with food, water, health and medical necessities, scientific equipment for missions to other worlds.

The DST would basically be a reusable vehicle, powered by electric and chemical propulsion, designed to get crews to places like Mars. The transport would basically take astronauts out to their destination, and return them to the DSG.

Gerstenmaier says the construction of the DST would be relatively much faster than the DSG, given that the latter acts as a sort of “proving ground” for the autonomous assembly of large structures in space, like the transport. Construction would occur from EM-6 through EM-11, taking place between 2027 and the early 2030s. Because the entire thing would be about 41 tons in weight, Gerstenmaier says these missions need to really be optimized for weight.

Both modules, as mentioned, are designed to be used by any NASA partners, present and future. For that reason, they will be both be fitted with the International Docking Standard to allow most kinds of spacecraft to dock with the structure and make use of it for future deep space missions.

The whole point of these two structures, however, is to make deep space exploration a consistent process — one that is not limited by the a necessity to front load a crewed vehicle with all of the resources required to get it safely from Earth to its destination and back.

From the outset, it’s clear NASA is approaching Mars missions with a different tactic than its closest rival, SpaceX. The Elon Musk-led company is thinking of an extraordinarily ambitious way to drive the costs of space travel down using reusable architecture and creating sustainable resources via Mars and other objects in the solar system. The whole goal from SpaceX’s point of view is to deliver a system that can sustain a growing colony on Mars.

That’s not what NASA is after. The DSG and DST designs illustrate how the agency, instead, is more keen on exploration for exploration’s sake. They are smaller structures designed to send fewer people to places, but are much more realistic — and given the threshold for presumed success NASA must meet in order to greenlight anything, the DSG and DST will probably work.

We just have to wait till the 2030s to see if these things are the real deal.

More like this
Science
Feb. 6, 2023
How the Webb Telescope is Rewriting What We Know About the Early Universe, One Galaxy at a Time
By Doris Elín Urrutia
Science
Jan. 29, 2023
This nuclear-powered X-ray “flashlight” may help scientists probe the Moon for water
By Andy Tomaswick and Universe Today
Science
Jan. 25, 2023
NASA and DARPA want to build a nuclear-powered spaceship
By Kiona Smith
LEARN SOMETHING NEW EVERY DAY.
Related Tags
Share: