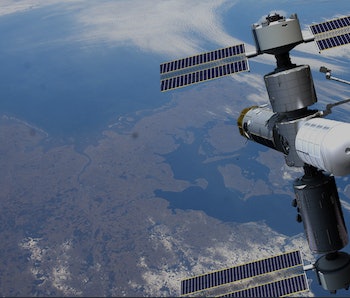 Axiom Space really, really wants to create a private space station, and it looks like the company hopes that once it gets something out of the atmosphere, it can build the rest from there. The private spaceflight company recently announced a partnership with Made in Space, a company that claims to be the first manufacturer to 3D print products in space.

According to a press release, the two companies are working out the details on how to make space station parts while actually in space. The goal, according to Axiom, is to have a privately-owned, nonsovereign space station in the sky by 2020.

At the start, though, Axiom’s station wouldn’t be completely independent. The initial module would be attached to the ISS, which NASA is increasingly finding is a gigantic financial burden. The space agency has said it may sell the station to a private company in 2020 if it can’t raise the money to extend the station’s life until 2028. The ISS has the cash to keep going until 2024, but could be de-orbited then. Axiom space wants to have the beginning of its private station up there before that happens.

“We are now deep into conversations with our first nonsovereign astronaut customers,” Amir Blachman, vice president of strategic development at Axiom told Space.com. So far, Blachman said the company is in talks with 20 or more countries, and if it hits its funding goals in 2017 and secures contracts with other corporations and government agencies, could start construction of the space station itself shortly after.

“The pace is quick,” Blachman told Space.com. “We’re answering a demand that’s clearly there … The demand is there; the need is there.”

The big selling point, Blachman said, is that Axios says it can keep people in space for a lot less money than NASA can. It costs the U.S. $7.5 million per astronaut, per day on the ISS, and Blachman said Axios comes in “far below that.”

Axios plans to sell space on its private station to research companies, government agencies, and tourists alike. Tickets will probably be crazy expensive, though (the Russians charge $81.7 million per seat on the Soyuz). But Michael Suffredini, President and CEO of Axiom and former ISS Program Manager, hopes that making things in space will help offset some of the costs of constantly resupplying a space station.

“In-space manufacturing provides a unique class of products beneficial to the communications, materials and biomedical industries on Earth. Made In Space is an exemplary company to collaborate with to meet the demand for in-space manufacturing, and we are thrilled to build a partnership with the individuals who have proven their abilities in zero-g flights and on ISS.”

Blachman said the whole thing is banking on an assumption that NASA seems to share — that the future of spaceflight will be private, not public.

“We’re the private company that’s going to continue the ISS legacy, so to speak,” Blachman said. “Our government and our agencies recognize that commercial is really the way to go.”