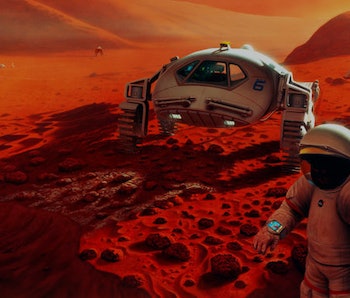 According to the bill, which you can read in full here, NASA must “study the feasibility” and work toward “a human space flight mission to Mars in 2033.” In all, Mars is mentioned 28 times.

To that end, NASA is expected to test two vehicles, the Space Launch System and Orion, in 2018. Next will come a crewed mission to cis-lunar space (the area encompassed by the Moon’s orbit) in 2021, followed by the highly-anticipated missions to Mars itself.

(Sec. 412) The key U.S. objectives for human expansion into space shall include achieving human exploration of Mars and beyond through the prioritization of those technologies and capabilities best suited for such a mission in accordance with the stepping stone approach to exploration specified in federal law.

(Sec. 413) NASA shall manage human space flight programs, including the Space Launch System (SLS) and the Orion multipurpose crew vehicle, to enable humans to explore Mars and other space destinations.

Within budgetary considerations, once an exploration-related project enters its development phase, NASA shall seek to complete such project without any undue delays.

Furthermore, in order to achieve the goal of successfully conducting a crewed mission to the surface of Mars, the president may invite U.S. partners in the ISS program and other nations, as appropriate, to participate in an international initiative under the leadership of the United States.

But fortunately for those of us who enjoy living on Earth, the bill does not cut NASA’s Earth Science division, even though Trump had before appeared ready to axe its programming. The Earth Science branch collects data we need to fight climate change, like precise information on where our planet’s dioxide emissions come from. NASA shouldn’t take this good news as cause to be complacent, though: since the federal budget is reorganized annually, there’s no guarantee that the Earth Science budget is safe for the remainder of Trump’s presidency. The agency should concentrate on taking advantage of it while they can.

Trump’s decision to sign the bill means it’s all the likelier that NASA’s Asteroid Robotic Redirect Mission (ARM), which was going to place a boulder from a near-Earth asteroid into the Moon’s orbit, will soon be dead in the water. “The technological and scientific goals of the Asteroid Robotic Redirect Mission have not been demonstrated to Congress to be commensurate with the cost,” the bill reads.

ARM would have tested useful technology intended to make travel to Mars cheaper and more sustainable. NASA has been unable to adequately explain that to Congress for some reason, so it’s no surprise that ARM has had trouble gaining traction. According to the bill, NASA must either put forth a more convincing case before next year or incorporate ARMS’s goals into other missions.