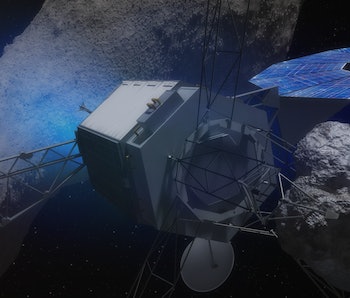 Congress just gave NASA $19.5 billion to spend for the 2017 fiscal year. The authorization bill, which still needs to be signed by President Trump to go into effect, is laden with language meant to direct the agency towards an ultimate goal of sending humans to Mars. To that end, it throws some shade against what’s been a pain point for any Congresspeople — the Asteroid Redirect Mission (ARM).

The goal of ARM is to send a robotic spacecraft to a near-Earth asteroid, pick up a small boulder from the surface, drive it back to the moon, and drop the boulder into lunar orbit. NASA has done an insanely poor job explaining why ARM is a good idea, and the resulting communication breakdown has caused many people in Congress to be highly skeptical about ARM.

The authorization bill directly addresses ARM (referring to it as the Asteroid Robotic Redirect Mission) and raises these concerns:

“alternative missions may provide a more cost effective and scientifically beneficial means to demonstrate the technologies needed for a human mission to Mars that would otherwise be demonstrated by the Asteroid Robotic Redirect Mission.”

The authors of the authorization bill essentially say that NASA either needs to make the benefits of ARM more explicit and outline in greater detail why ARM is the way to test out new technologies, or fold these goals into other missions that might have a more direct relevance to human exploration and deep space travel.

There are, in fact, good reasons behind ARM. The mission is expected to test out solar electric propulsion technology that would make it more sustainable and cost-effective to travel to Mars — along with many other technologies that fold into deep space travel. The research goals have direct relevance to asteroid mining and asteroid impact mitigation. There is also the potential for ARM to usher in a new way of thinking about the future of deep space infrastructure and how humans can establish essential, permanent resources throughout cis-lunar space.

Nevertheless, unless NASA’s scientists and engineers do a better job making their case to NASA for why ARM must go on, the mission’s future looks shakier than ever. The new authorization bill stops short of nixing the mission altogether, but it remains to be seen how much support the agency can shore up within the year to ensure its viability.