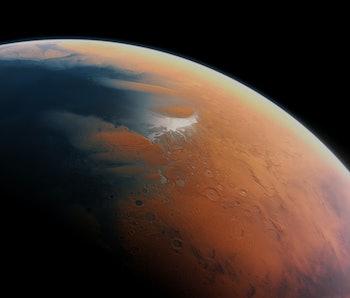 NASA Administrator Charles Bolden said Wednesday that the upcoming Asteroid Redirect Mission is “an important step for us on the journey to Mars.” As one of agency’s most ambitious projects ever conceived, the mission — ARM for short — will be “an opportunity for us to sit out on the proving ground” for getting human boots on the red planet, Bolden said. In many ways, it’s a test run for future Mars missions. But it’s a pretty exciting mission in its own right, too.

How the Asteroid Redirect Mission works

In brief, a robotic spacecraft will head to a nearby asteroid and, for the first time ever, use solar-electric propulsion to land on an asteroid’s surface. It will then scoop up a multi-ton boulder, go back into space, and use the new mass and gravitational influence to reroute the asteroid. Eventually — about ten years from now — astronauts will rendezvous with the spacecraft, take samples from the asteroid boulder, and return the samples to Earth for analysis. ARM will “give us a chance to do some of the things we expect we’ll need to do in the Mars environment,” Bolden said.

The asteroid NASA is looking to send the ARM spacecraft to is carbonaceous, containing “compounds from early formation of the solar system,” Gates said. NASA estimates that it’s about 20 percent water, and, of course, it’s never been visited before. By extracting materials from the asteroid, scientists hope to unlock more information about the origins of life in the universe.

Moreover, the whole mission will be something of a baby step in testing out operations relevant to mining asteroids. ARM will enable us to learn “how to exploit asteroids commercially,” said Gates.

Lastly, by redirecting a large cosmic rock, we will better understand how to redirect dangerous asteroids, which could threaten our existence should they ever head Earth’s way. It will improve “capabilities that we may ultimately need to deflect an asteroid on a collision course with Earth,” Gates explained.

“We have to be smarter than the dinosaurs,” Holdren said.

Asteroids: Rest Stops on the Journey to Mars

But arguably the most exciting aspect of ARM is how it will spur our eventual Mars missions. ARM will require human operations in cislunar space. Unlike current missions — which are “Earth-reliant” and therefore easy to troubleshoot, resupply, and embark on rescues — the asteroid mission and future Mars missions will “stretch our capabilities,” Bolden said. Astronauts and spacecraft will be, at minimum, a couple days away from Earth, which means NASA must figure out new ways to solve problems, resupply crews, and so on. Holdren explained that proving our ability to carry out human operations in cislunar space is the “most important step on the mission to Mars.”

According to Bolden, these cislunar operations will take place in the 2020s. In the 2030s, he expects NASA to move into the Earth independent phase, where Martian operations will finally focus around the red planet directly. This will require NASA to “develop new techniques,” he said, which is why ARM is great for interplanetary travel.

For starters, these lengthy missions mean astronauts must take supplies with them, manufacture supplies on the way, and await arrival to Mars and make them there (à la Matt Damon in The Martian). Humans will need to work hand-in-hand with robots on the planet’s surface. New solar-electric propulsion technology will be crucial for making the journey sustainable.

Bolden expects that NASA will work in conjunction with both private and academic ventures (like SpaceX and Blue Origin, for instance) to overcome these and other challenges.

ARM will test NASA’s own abilities in each of those realms. NASA will need to demonstrate first that its technology — solar-electric propelled spacecraft, robots, etc. — will work, followed by training astronauts to complete necessary tasks in cislunar space.

Humans have been dreaming of going to Mars for centuries, Bolden said, and now it’s at last becoming achievable. “Some of us can taste it,” he joked. Still, NASA is not rash: the agency has a detailed plan, and every checkpoint will get us figuratively — if not literally — closer to Mars. “Everything we do is incrementally planned,” he said.

Holdren explained that President Barack Obama is thrilled about the mission, in large part because it checks off so many important, monumental boxes. “We think this mission pulls together so many threads of what we need to be doing on the way to Mars,” Holdren said.

The robotic spacecraft is slated to launch by the end of this decade. The human visit to the lunar boulder will occur about a decade from now, and Mars missions should take flight in the 2030s. While it’d be unwise to hold your breath, rest assured that — with the help of NASA — Mars is coming.

More like this
Science
5.17.2022 8:45 PM
NASA announces the end of its Marsquake-hunting lander
By Doris Elín Urrutia
Science
5.14.2022 1:00 PM
NASA's ailing Mars lander captures the biggest Marsquake yet
By Jeff Nagle
Science
5.13.2022 6:00 PM
Once a year, we get closer to NASA's Voyagers — here's why
By Elizabeth Howell
Related Tags
Share: