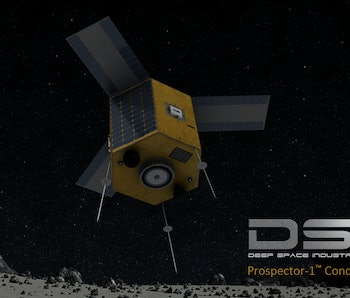 Space mining company Deep Space Industries just announced the world’s first-ever commercial space mining mission. By 2020, the company will launch its Prospector-1 robotic spacecraft on an asteroid, land on it, and investigate its potential value as a source of precious metals, minerals, water, and other resources.

“Deep Space Industries has worked diligently to get to this point, and now we can say with confidence that we have the right technology, the right team and the right plan to execute this historic mission,” said company chairman and co-founder Rick Tumlinson in a news release. “Prospector-1 will be the next step on our way to harvesting asteroid resources.”

Here’s the itinerary: DSI will send its flagship 50-kg Prospector-1 spacecraft to rendezvous with a near-Earth asteroid. Upon arrival, Prospector-1 will use its instruments to image the surface and subsurface. The goal is to map the overall water content of the asteroid down to roughly one meter in depth.

The most exciting part comes afterward, when the spacecraft will attempt to land on the asteroid itself in order to collect more direct geological data.

“The ability to locate, travel to, and analyze potentially rich supplies of space resources is critical to our plans,” said DSI CEO Daniel Faber. “This means not just looking at the target, but actually making contact.”

DSI aims to launch Prospector-1 and send it out of Earth’s orbit before the decade is over. Preceding that will be the launch of the Prospector-X mission in 2017, which will send a low-cost precursor spacecraft to test out different technologies used for the main asteroid mission.

Though the landing a commercial spacecraft on an asteroid would be a groundbreaking achievement itself, one of the most significant goals behind this mission is to test “Comet” — Prospector-1’s novel water propulsion system, which creates thrust for the ship by ejecting extremely hot water vapor. Proving the viability of such a system would advance sustainable propulsion mechanisms for space travel. DSI and other companies believe the potential to mine for water on asteroids and other planets and moons means a spacecraft could be fitted without any sort of chemical or electrical-based propulsion system and simply refuel itself through water reserves in space itself.

One question remains unresolved: which asteroid will Prospector-1 travel to? DSI is still weighing options, but don’t be surprised if the company narrows its candidates down to a list that looks similar to the one for NASA’s Asteroid Redirect Mission.

The new mission is welcome news, but is by no means a huge shocker. For much of the past year, DSI — which has been very vocal about its goals to pioneer the future of space mining — has been carefully laying down the necessary pieces for a commercial mission to journey to an asteroid. In May, the company formalized a partnership with Luxembourg, which recently passed legislation geared towards attracting commercial space mining companies to the country in an effort to turn the small European nation into the space mining capital of the world.

Under the agreement, Luxembourg essentially agreed to fund the construction and launch of the Prospector-X mission. The country will likely work with DSI to move forward the Prospector-1 mission as well. If successful, the results could cement Luxembourg as a powerhouse for commercial space travel and exploration. It’s going to be a wild rest of the decade for space travel, that’s for sure.

More like this
Science
8.12.2022 10:00 AM
45 years ago, the first Space Shuttle made history without going to space
By Allie Hutchison
Science
8.3.2022 8:56 PM
NASA confirms Artemis I launch date and previews upcoming milestones
By Kiona Smith
Science
1 hour ago
A new plasma-based technology could be crucial for living on Mars
By Doris Elín Urrutia
Share: