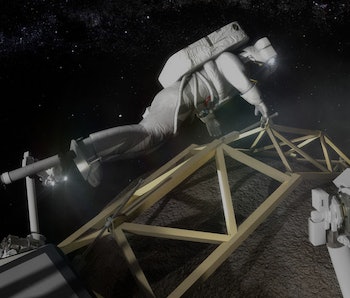 In case you weren’t already aware, one of the things NASA plans to do in the 2020s is to send a robotic spacecraft to a near-Earth asteroid, pick up a stray boulder off the surface, tug it back to the moon and drop it off in lunar orbit for astronauts to later study.

Yes, the Asteroid Redirect Mission (ARM) is equal parts ambitious and strange, and there has been no shortage of questions as to whether this project makes a whole lot of sense. NASA’s official line has been to tout that it’s an essential stepping stone, and at the NASA Advisory Council Human Exploration and Operations Committee Meeting on Monday, Ron Ticker, the deputy program director for ARM, quelled doubts the agency was pushing along a fringe project with no real purpose.

ARM, Ticker argued, is a “demonstration mission” that will test new spaceflight technologies relevant to uncrewed and crewed deep space travel, and validate a lot of systems that will play a pivotal role in the overall goal to send humans to Mars. There are three main phases to the mission: identifying candidate asteroids using ground-based equipment like the Arecibo Observatory in Puerto Rico or the Wide-field Infrared Survey Explore in space and choosing a target for the mission; launching a solar-electric propulsion-based robotic spacecraft to the target asteroid and having it pluck a boulder off toward cislunar space; and sending a crew out there onboard the deep space Orion vehicle so they can study it.

Ticker told teleconference attendees that the launch of the spacecraft would be December 2021, with a goal to have an Orion crew visit the moon-orbiting boulder in 2026.

The ARM team has focused down on four valid asteroid candidates, but the most promising asteroid is 2008 EV5. The ARM team is already using it as a reference asteroid for designing the mission, and it already meets the biggest criteria for a target rock: it’s carbonaceous, believed to be rich in “volatiles” like water and organics that are important to both future space mining industrialists and scientists alike.

ARM is testing out a ton of new technologies necessary for deep space travel, and among them is solar electric propulsion (which should reduce reliance on finite and space-eating fuel), high efficiency solar arrays, and deep-space rendezvous and docking capabilities. Ticker described the spacecraft gripper as “like finger nails gripping and pulling into the surface. They’re like really hard fishhooks.”

A few of the more ambitious parts that go along with ARM have to do with planetary defense and new kinds of extravehicular activities for astronauts, respectively. NASA plans to use ARM as a way to test out a prototype “gravity tractor” technology that could be used in the future to help deflect an asteroid that poses a hostile threat to Earth — “a primary objective,” Ticker said.

For extravehicular activities, NASA will look into designing new spacesuits that are capable of letting astronauts do a lot more during spacewalks, though current budgetary constraints mean the agency won’t get around to stitching those up until around 2019.

Other NASA officials have said they have plans to speak with Congressional staffers about ARM and assuage concerns the agency is wasting valuable time and resources on something impractical.

A successful ARM mission would be the craziest thing NASA has ever done, but would also hit on pretty much every big agency objective. ARM would basically kill a dozen space birds with one space rock.

More like this
Science
7.25.2022 1:30 PM
The Webb Telescope will drop everything to observe the next interstellar object
By Darren Orf
Science
8.2.2022 6:15 PM
Behold! New Webb image reveals a dynamic and "rare" galaxy
By Doris Elín Urrutia
Science
8.7.2022 11:00 AM
Webb Telescope discovers an “amazing” galaxy from the edge of time
By LAURENCE TOGNETTI and Universe Today
Related Tags
Share: