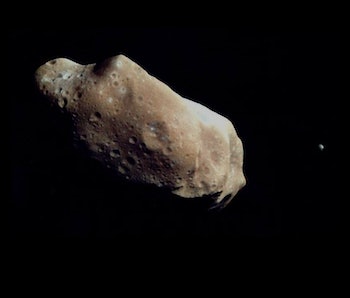 In five years or so, NASA will begin initiating the launch process for its Asteroid Redirect Mission, or ARM. It’s one of those scientific endeavors that has a clear goal, yet an unclear purpose. The goal of the mission is to send a robotic probe off to a near-Earth asteroid, find a small boulder somewhere between one and two dozen feet in diameter sitting on the surface of the asteroid, pick it up, and transfer it to the moon where it can be placed in a stable lunar orbit. In effect, it turns the asteroid into a kind of natural satellite.

Why, exactly, does NASA want to do something like this? No one is completely sure. ARM is meant to be part of a slew of missions to test out the capabilities of the Orion spacecraft and NASA’s new Space Launch System. Together, both systems will help NASA conduct more and more crewed operations into the farther reaches of space, eventually culminating in successfully getting astronauts to Mars before 2040.

As I’ve written before, there’s a good chance the purpose of ARM is to simply prove that it’s possible to use robotic technology to haul a big payload off an asteroid (or other object) and successfully move into another moon or planet’s orbit. This could be critical for several reasons. One is that it helps establish orbits as a form of possible storage space that humans could access above the ground, allowing rocket launches off the ground to be conducted with less fuel and energy costs.

Another reason with bigger ramifications is that asteroids themselves could play an important role as reservoirs of natural resources like certain metals and even water. The SPACE Act of 2015 sets the stage for private companies to begin exploiting those objects and keeping ownership over what they find. Imagine we’re able to improve spaceflight technology to the point where water or other elements commonly found in space can act as a propellent. Suddenly, any celestial rock that can be mined becomes a miniature oil field, usher in a new interstellar gold rush for precious resources every single nook and cranny in the solar system. Having an asteroid

A 2011 proposal for an asteroid capture system discusses how the asteroid Apophis contains significant amends of iron, water, oxygen, and other materials that would be extremely useful in space — enough to power about 150 five-gigawatt solar power satellites. Turning such a rock into a satellite could be a great way to ensure access to these resources when they are needed — not to mention it ensures the asteroid has no chance of hitting the Earth or other objects important to human projects.

Okay, so turning an asteroid into a satellite has plenty of potential upsides. The real question is: Can we realistically accomplish something like this?

Hell no. At least, not right now. ARM is the first step towards helping us get there, but a projected boulder for this mission would only be around 500 tons. By comparison, Apophis from the previously mentioned proposal comes in at a mass of 27 megatons — or roughly 27 million tons. Yikes.

Another problem is that many asteroids appear to actually be big piles of rubble — perhaps encased in a solid rock casing, but with insides as good as coarse sand.

But what if these were no longer obstacles? What if big sizes and masses weren’t impediments, and we found an easy way to differentiate the solid asteroids from the rubbly ones?

We’d have to find a way to apply thrust to the asteroid. We could dock on the surface of the asteroid and push it in a transitional way (with thrusters), but asteroid rotation and microgravity could make things problematic. Something like a gravity tractor could be used to gently nudge an asteroid over to a desired destination, but this would be a much much slower process.

The most efficient method would probably be to wait till the Earth (or another planet) is in a position to help slingshot an asteroid’s orbit in such a way as to bring it close to entering the planet’s gravitational field. Then, humans just have to come in and apply a more minimal type of intervention to make sure the asteroid safety enters the planet’s orbit. This would probably be through some kind of massive spacecraft that acts like a tugboat for outer space objects.

If the asteroid was stable enough, humans could theoretically start placing different kinds of installations on the surface or even building right on it. The kinds of technology that could most take advantage of an asteroid-satellite environment are probably massive communications arrays or defense systems. And let’s not forget the potential for full-scale mining operations to take off.

This is still an incredibly long ways away from what’s even remotely possible. But if humans really are serious about space travel, we’re going to need to start considering how to really take advantage of the resources at our disposal. Nothing should be off limits — least of all if there’s water to collect.

More like this
Science
6.26.2022 10:30 AM
New molecules found on a nearby asteroid could reveal the origins of life
By Matt Williams and Universe Today
Science
12 hours ago
These 5 objects could be Webb's full-color first images
By Kiona Smith
Science
6.20.2022 11:00 AM
When Earth’s magnetic poles flip it could be “chaos” for future humans
By Evan Gough and Universe Today
Related Tags
Share: