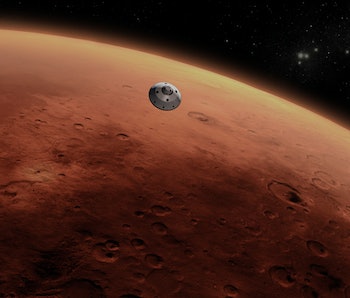 The House Committee on Science, Space, and Technology held a special hearing on Wednesday to talk about NASA, and it was not there to shower praises. Members of Congress basically skewered NASA’s Journey to Mars initiative for being way too vague and naive. In the minds of elected officials, NASA needs to create a detailed plan that clearly defines specific milestones and goals necessary for the agency to safely send a crew to the red planet and bring them back before 2040.

Furthermore, the committee expressed big doubts that NASA would even be able to send astronauts to Mars by this date based on current funds and projections in technology advancements.

Some witnesses testified that NASA will either need to rethink its long term plans for Mars, or drop the endeavor and refocus on sending people to the moon. It’s not often that Congress demonstrates critical aptitude in science and tech, but in this case, they raise some pretty fair concerns.

“We do not have a planned strategy or architecture with sufficient detail,” said Tom Young, former director of NASA’s Goddard Space Flight Center, regarding the Journey to Mars initiative.

To get us to Mars, NASA is constructing a new rocket system, the Space Launch System, designed to put crewed spacecraft on a path for travel out beyond low Earth orbit. The spacecraft will be the Orion capsule. NASA has been working on developing and testing these two pieces since the start of the decade.

To send a crew to Mars, however, we’re going to need a helluva lot more equipment, like long term habitat modules, and landing and launch systems. There’s no reason to believe NASA is working to developing those things as of yet.

Then there’s the timeline issue for missions that need to occur before we can send humans to Mars. In 2018, NASA will conduct the first test flight for the SLS-Orion integrated system. After that, however, things aren’t so clear. The first crewed Orion flight is supposed to occur in 2021, and no later than 2023. The agency doesn’t have anything planned afterward.

The committee seemed most irritated about how the Asteroid Redirect Mission (ARM) — NASA’s plan to send a robotic spacecraft to a near-Earth asteroid, pick up a giant boulder, and bring it to lunar orbit for a crew to study — fits into the overall Mars objective.

Though an extremely interesting and ambitious project, ARM has also been criticized in the past for not having a clear, specific purpose. NASA claims its goal is to demonstrate new solar electrical propulsion technology that would be used on a Mars mission — but witnesses at the hearing stated the agency could accomplish this through an easier, less expensive mission.

It’s pretty easy to argue that ARM folds in very well with helping to lay the ground work for the inevitable future of asteroid mining operations. And Representative Brian Babin of Texas raised this point, suggesting the main focus of ARM ought to be studying an asteroid itself.

[ARM] is a misguided mission without a mission, without a launch date, and without ties to exploration goals,” said Representative Lamar Smith from Texas. “It’s just a time-wasting distraction.”

Time wasn’t the only thorn up the committee’s arse. Money was another. John Sommerer, chair of the National Academy of Sciences, told the committee he believed NASA would need to spend about a half-trillion dollars to successfully pull off a mission to Mars. This doesn’t just encompass the actual mission, but also everything else leading up to it — new tech advancements, research, testing, training astronauts, etc.

The biggest technical obstacle, in fact, will probably be mitigating the risks posed by space radiation. NASA is nowhere near prepared to ensure its astronauts are safe from long term radiation exposure. They must find solutions soon — and this will require a lot more money and lot more innovation and testing.

All of this is why Sommerer and Paul Spudis, a senior scientist at the Lunar and Planetary Institute who also testified at the hearing, think NASA should turn its focus back to the moon. In their minds, this is much more doable, and ingratiates NASA into the rest of the world’s efforts to establish permanent lunar outposts.

Furthermore, the moon is a key stepping stone for sending people to Mars. NASA even knows this — yet they’ve left going back to the moon to international partners like Europe, Russia, China, and other countries.

“Virtually every witness we’ve ever had come before this committee has said we need to have a lunar base as part of the stepping stone,” said Representative Bill Posey of Florida. “The only ones we haven’t yet got that through [to] is NASA.”

How did NASA respond to all of these complaints? Well, no one from NASA was actually invited to testify before the committee. If the Republican-led committee was after a balanced discussion to evaluate NASA fairly, it did a poor job. In recent years, NASA has made some pretty big strides with getting the most bang out of their buck (case in point: this week’s selection of CubeSats going up on the 2018 Orion mission). The process by which NASA decides which projects are best to pursue is extensive, and perhaps the only reason they don’t have a detailed plan of action is because it is, in fact, way too early to draft one up.

Nevertheless, NASA has a myriad of things to work on just to prepare for Mars. The best way to shut down the naysayers is to produce tangible results. Let’s hope all of that work culminates in watching a human foot hit the Martian dirt within a couple decades.