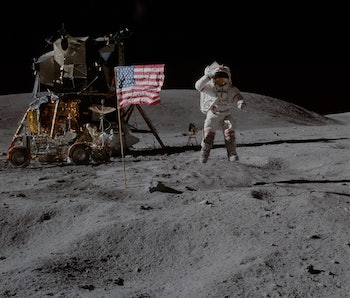 The last time a human being set foot on the moon was 44 years ago. We haven’t been back since. With concrete plans to send people to Mars, we have to ask: What’s the holdup? When are sending people back to the moon?

For two decades after Apollo 17, space exploration (read: NASA) was decidedly done with moon-related missions. Starting in the ’90s, humans began sending robotic probes and orbiters on visits. Some of these missions were huge — the Lunar Prospector orbiter, for instance, found water ice on the surface of the lunar pole. Others, like India’s Chandrayaan-1, launched in 2008, were basically just a proof-of-concept test.

The biggest lunar mission of this decade is probably China’s soft-landing (read: one that doesn’t end in a crash) of the Chang’e 3 rover — which recently discovered a new variety of moon rock.

It’s also exciting to see future missions planed for the next several years — like the upcoming Chang’e 4 and 5 — and the privately run Google Lunar X Prize competition. But what about people? When are we finally seeing humans in boots back on the moon?

Don’t count on NASA getting involved any time soon. Though the space agency is speeding up preparation for its Asteroid Redirect Mission (which plans to take a boulder off a near-Earth asteroid and place it into lunar orbit for … study?), that won’t involve getting astronauts to the surface. In 2013, NASA administrator Charles Bolden went on the record, saying “NASA is not going to the moon with a human as a primary project probably in my lifetime.” That was soon after the Obama administration canceled the Constellation Program, which would have returned us to the moon “no later than 2020.”

We’re still left with a ton of questions, primarily because NASA has been vocal about using the moon as a proving ground for Mars-bound technology. Plus, the moon could act as a refueling point for a Mars-bound crew, a place to restock on needed supplies (assuming we’ve already installed the necessary infrastructure on the lunar surface or in orbit).

It’s possible NASA is taking advantage of the fact its international counterparts are happily picking up the lunar mantle, with plans to get humans back to the moon. These won’t simply be new feats of scientific exploration, but part of an effort to establish permanent moon bases and mining operations.

If so, this makes perfect sense for NASA. With the United States opting out, there’s a much smaller chance for another expensive and high-tension space race. Russia is aiming to send an astronaut to the moon by 2029, with the express intention of leaving Mars to the Yankees. China and Japan are aiming for a similar time frame. The European Space Agency might be in the best position: The E.S.A. relies on realistic strategies, has given itself a 2040 deadline for a moon base, and would likely land astronauts there between 2025 and 2035.

The problem? There’s no reason to believe any of these countries will actually follow through with their designs. Besides the U.S., Russia, and China are the only countries that have actually sent people into space. China has not yet shown itself as an effective authority on science and tech — and that includes space. Russia’s own space program is on the ropes, and the government seems less than enthusiastic to keep it propped up. Without the U.S. leading the charge, there’s a strong chance none of the countries will send astronauts back to the moon — at least not within the next 15 years.

Would that throw a wrench in the U.S. push to get to Mars? Not quite. NASA’s focus on using the moon is limited to the lunar orbit and cislunar orbit (space between Earth and the moon). We can still get to Mars without actually landing on the moon.

The best way to get us back to the moon is for the U.S. to get back in the race. Since that’s not likely to occur, we can probably expect another two decades or so before Earth’s only natural satellite has visitors once again.