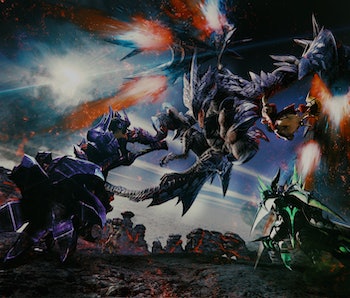 During the Monster Hunter Championship in late May, Capcom announced the official release date for Monster Hunter XX for August 25 in Japan. As expected, there are no details regarding the game’s release date in the West, although we’ll likely see a formal announcement from Nintendo with E3 around the corner.

Unlike most of Nintendo’s other systems, the Nintendo Switch isn’t a region locked console, which means you’ll be able to pick up a Japanese copy of Monster Hunter XX and play it stateside. That’s assuming you’re up to speed on your Japanese, or you’re familiar enough with the game to navigate the menus.

Once released in the U.S., you will be able to transfer your Monster Hunter Generations save data to the Switch version of Monster Hunter XX. This will allow you to get a head start on your weapons collection, equipment crafting, and rank progression.

No matter what, the good news is that Monster Hunter will be heading to the Nintendo Switch, which adds another one of Nintendo’s most popular and well-respected franchises to the company’s newest platform. Now, we just have to sit and wait for more news regarding Monster Hunter XX’s Western release at E3.