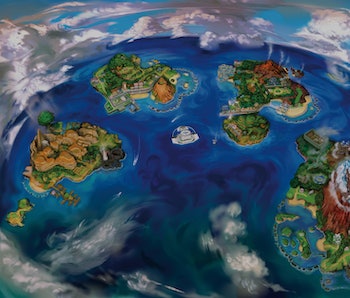 Earlier this May, the Japanese Pokémon Center added a new line of merchandise inspired by everybody’s favorite troublemaker from Pokémon Sun and Moon, named Cosmog. The leading legendary Pokémon seemed to be the perfect fit for the “Look Upon the Stars” collection, due to his celestial inspiration — which led fans to believe the collection itself was a nod toward the rumored Pokémon Stars Eurogamer reported on last year.

Stars would be a third version for this generation of Pokémon games, which is pretty typical. It would be what Yellow was to Red and Blue. However, there are rumors this version could be a little more than previous games. Around the time that Sun and Moon first came out, Eurogamer reported that a director’s cut version of Pokémon Sun and Pokémon Moon would pull the games into a single experience for the Nintendo Switch. The news seemed to be a little too good to be true. Game Freak has never brought a third version of a Pokémon game to a new platform before. Still, fans are expecting something, and they’re looking at old YouTube videos as evidence.

Earlier this week, Nintendo did a bit of housekeeping on its YouTube channels, removing an old Pokémon-themed Nintendo Direct from YouTube. The video was last February’s reveal of Pokémon Sun and Moon, which followed a presentation for the series’ anniversary — as pointed out on NeoGAF by Serebii.net’s Joe Merrick.

Merrick mentioned that Nintendo still has the Nintendo Direct announcing Pokémon X and Y live on YouTube, but since Nintendo never made what probably would’ve been called Pokémon Z, there is no third game that could confuse players or muddle the message. In the event that an old video is potentially confusing in light of updated information or new games, Nintendo tends to pull the offending videos. So, it’s potentially telling that the Sun and Moon video got the axe.

Fans are hoping the video’s removal means Nintendo is getting prepared to reveal Pokémon Stars, the rumored title for the Nintendo Switch Eurogamer reported was set for a mid-2017 release. The current guess is that a new Nintendo Direct will be coming around E3, that will introduce the game and discuss the next step of Pokémon’s evolution.

No matter what you believe, though, we’re still a few weeks away from E3 kicking into gear and Nintendo presenting what it’s been working on for the Switch. While Nintendo has never revealed a major Pokémon game at E3, it might be a good time to announce Pokémon Stars, should the game actually exist. But until Nintendo’s next Nintendo Direct, it remains a wild rumor fans just can’t seem to stop talking about.