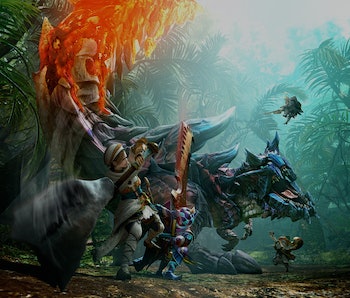 Monster Hunter is an incredibly complex and rewarding franchise to dive into, filled with hundreds of quests and monsters to hunt down with your friends. Essentially you’ll be preparing for a hunt with a handful of items, bringing along a specific set of equipment, taking on quests, and killing monsters; which in turn provide you with a plethora (hopefully) of monster parts that you can use to upgrade your gear. That repeats again and again, but there’s some specific sets worth aiming for from the start.

Weapons and armor in Monster Hunter Generations are easily the most valuable assets in the game. Not only do they buff up your defensive and offensive capabilities, but they help you by providing bonuses like Constitution, which slows stamina depletion and adds a 360-degree evade roll or Destroyer, which makes it easier to break or sever parts off of monsters. Some of the main skills also have addition levels too, which can affect you negatively or positively depending on the pieces of armor you have equipped.

Regardless of the impact, each of these skills are extremely valuable and easy to obtain provided you work towards the proper equipment sets. As you’re playing Monster Hunter Generations you’ll pick up on the basics of each, but in order to get yourself started try working towards a few of the following sets:

In the past Jaggi has been regarded as the definitive starting armor set to pursue while starting a new game. As a set, Jaggi provides you with the Attack Up (S) skill, boosting your damage output a decent amount at the beginning of the game. Like previous Monster Hunter installments, Jaggi are extremely easy to find in the early hours of the game, which makes farming enough materials for the set a cakewalk. Once you’ve got an entire set, you can just use Jaggi parts to make a few of the game’s starting weapons as well. You can also mix it with some of the other starting sets, like Bulldrome for example, to get access to a few other skill bonuses in attack early on.

If using ranged weapons like the bow is more of your thing, you might want to consider going on a few Royal Ludroth hunts with some of your friends. The Royal Ludroth isn’t too difficult to bring down and awards you with a decent amount of parts for each successful hunt you complete — plus it nets you the Ludroth set. One of the main issues you’ll be facing while combating monsters at range is the constant depletion of your stamina, which this set can help negate with Stam Recover Up and Negate Hunger. Stam Recovery Up will increase your stamina recovery drastically while Negate Hunter prevents stamina from depleting fast from bow use. In order to get the skill points right for this set, you may have to play around with some jewels in your armor, but it’s not difficult to figure out early on.

While tanking certainly isn’t a dedicated role in Monster Hunter, it does help to have a hefty amount of damage prevention if youre using one of the heavier weapons that requires you to be up close and personal. Provided you have a weapon with a shield, like the Charge Blade for example, Hermitaur is going to be your best bet in the low-rank quests. While it will take a decent amount of time to unlock hunts for, the Hermitaur armor set provides you with Speed Sharpening and Guard +1 after fitting a few jewels into the sockets. Speed Sharpening will allow you to sharpen your weapon faster once it dulls, meaning that you’ll have less down time during fights. Guard +1 on the other hand will allow you to withstand greater amounts of punishment behind your shield, reducing the chance that monsters will knock you down when blocking and the stamina loss you receive from doing so.