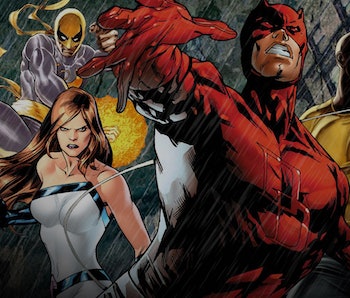 The first season of Marvel’s The Defenders, an ensemble series starring the four main heroes of Marvel’s Netflix franchise, has been shrouded in mystery. But, the main villain has dropped a hint about how big the stakes will get, and it looks like things are going to get apocalyptic.

In an interview with Fandango, Sigourney Weaver talked about how excited she is to play a baddie on the first season of The Defenders, which is currently filming. While chatting about her character, who she sarcastically described as a “really nice woman,” she noted that one aspect of the show has been a bit tricky for her to grasp: the whole apocalypse thing.

“Basically the four heroes come up against this really nice woman, who I’m playing,” Weaver said. “To me they’re not superheroes; they’re people with a gift. It’s just a different scale, and I’m really enjoying the scale of it. The apocalyptic thing is a little harder for me to understand.”

Apocalypses are nothing new in the Marvel Cinematic Universe, but we haven’t seen really seen one in any of the Netflix series so far. The closest we got was the Black Sky reveal in the second season of Daredevil, although we still don’t know exactly whether it’s a weapon of mass destruction or just a name for a badass warrior. There are rumors that Weaver’s character could be a leader of the Hand, which is the group that worships the power of the Black Sky. If that’s the case, it could turn out to be an apocalyptic weapon.

Even though speculation is rampant, we still don’t know much about Weaver’s character on the show other than she’s smart and not very friendly, but if she’s bringing an apocalypse, that could make things exciting. It makes sense that The Defenders would feature an apocalyptic storyline rather than just tidying up Hell’s Kitchen. We’re dealing with four superheroes now — not just one — and they need something really big to smash. The Defenders debuts on Netflix in 2017, likely after Iron Fist, which comes out March 17, 2017.