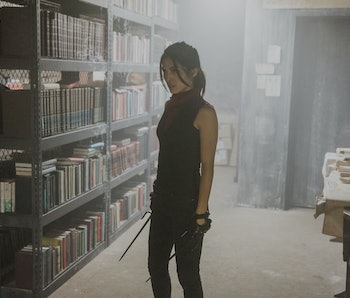 It seems Elektra isn’t just coming back from the dead: She could also be one hell of an formidable enemy for the Defenders.

Marvel’s street-level superheroes Daredevil, Jessica Jones, Luke Cage, and Iron Fist will team up next year in The Defenders, airing on Netflix in 2017. Joining the ensemble series is Elodie Yung, reprising her role Elektra from Daredevil Season 2.

In a new motion graphic, Yung’s Elektra joins the series with the tagline, “Those who surround us, define us.” The graphic is similar to the previous announcements that revealed Karen Page (Deborah Ann Woll), Misty Knight (Simone Missick), and Foggy Nelson (Elden Henson) as part of the Netflix-exclusive Marvel series.

At the end of Daredevil Season 2, Elektra was revealed to be a Black Sky, the secret weapon of the Hand, a ninja clan that tried to take over Hell’s Kitchen. Although Elektra was killed, her corpse was recovered by the Hand and placed in a tomb with the obvious implication that she’ll be resurrected. That appears to be the case now that Elektra is officially playing a major role in The Defenders.

Given Elektra’s true powers as a Black Sky, her command under the Hand could make her a truly formidable opponent against the Defenders. Even with the likes of Jessica Jones and Luke Cage — who are both super-strong — and fellow martial artist Iron Fist, there’s going to be a lot of bruises when the Defenders try to protect New York.

Marvel’s The Defenders airs on Netflix in 2017.