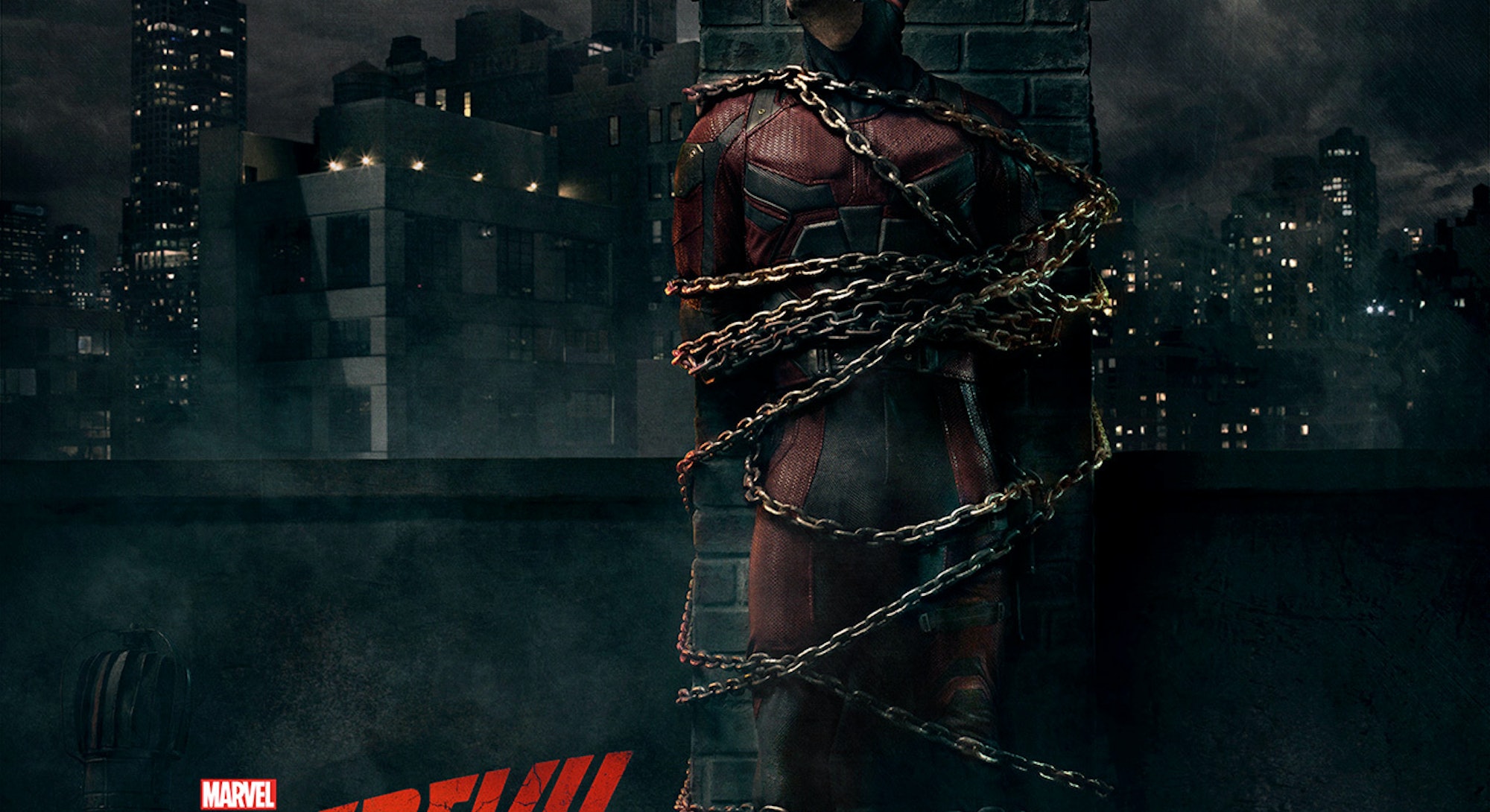 Midtown attorney Matt Murdock, who prowls Hell’s Kitchen as the Marvel street hero Daredevil, is blind. To fight criminals who run amok in his neighborhood, Murdock “sees” through sound, which has served him him well in 50-plus years in comic books and two seasons of an acclaimed Netflix show starring Charlie Cox as the scarlet vigilante.

“We had this idea of Matt using his senses. I wanted sounds as if they were coming from inside the body and the most obvious is a heartbeat,” said composer John Paesano, whose latest orchestral score can be heard in Season 2 of Marvel’s Daredevil, streaming now on Netflix. “We took a lot of natural instruments, hand drums or sticks, or the violin bow slapped against the neck, or acoustic. We put them through distortion, and basically treated them as if they were heard through a wall or inside of the body.”

A late bloomer who didn’t take up music until middle school, Paesano traces his inspirations back to Steven Spielberg’s Empire of the Sun which had a profound impact on the future Annie Award-winner. “From that point, I started paying attention to music and how it was utilized in films,” he told Inverse.

From children’s cartoons like DreamWorks Dragons to movie franchises like The Maze Runner, Paesano now orchestrates gritty superheroes in Marvel’s prestige action noir, which he textures with rhythmic, pulsing sounds.

What influenced the overall sound of Daredevil?

I worked with Steven DeKnight, the showrunner on Season 1, and the one thing Steven and I, and Marvel agreed was that we wanted to do something that was not your typical superhero sound.

The Marvel Universe had, until Daredevil, a fantastical musical identity. With Daredevil we felt he had a lot of demons in the closet. He was more hardened than Captain America or Iron Man, we thought to make sure we captured that. One of the ways Steven really wanted to do it, and I agreed, was make the music grounded. We thought by doing that it would make the show grittier, edgier. We still wanted to give it energy and epicness but make sure people watching felt the music and didn’t necessarily hear the music. That was the challenge. If we went highly orchestral, it would have softened his character a lot.

Daredevil is a unique character, not the least of which because he’s blind. How did you factor his deprived sense of sight and reliance of sound into the score?

I wanted to make the music feel like inside the head of Matt Murdock. The music is always told through his perspective, not outside. It’s a very, we’ll call it a hybrid orchestral score. We use orchestra in Season 1 sparingly, only in dramatic moments or the last episode, but for the most part it’s hybrid.

I chose acoustic instruments because there is a warmth to them, although Matt is a superhero there’s a side that revolves around his father, a loss he felt as a boy. There’s a huge emotional side, I would say more than most of Marvel. Matt Murdock’s got a unique story about how he came to be, a lot of it very emotionally centered.

For the pulsing, we took a lot of natural instruments through distortion. We took off the clean, high end of the instruments to capture the base elements of those sounds, as somebody inside a body would hear them if they were played outside. Matt is so introspective, sensing danger, trying to read if somebody’s lying or telling the truth, and that’s where a lot of the magic happens.

Besides blindness, Murdock’s dedication to Hell’s Kitchen is his defining characteristic. Did you consider implementing New York’s rich musical history into the score at all?

I remember when we were doing our first spotting session, Steven kept saying, “We want to hear the city.” It was very important to him. He wanted people to feel like they were in the city and the tendency with music is if you have too much, it tends to push the viewer out. If you have minimal music, it makes them feel like they’re there. The goal of the score was to feel and not hear so it could invite people, make them feel like they were sitting with Karen (Deborah Ann Woll) or Matt.

Despite its gritty tone and aesthetic, Daredevil is within the Marvel Cinematic Universe, alongside The Avengers. What was Marvel like, as a brand, while you worked on the show? Did they look over your shoulder too much, or not at all?

No. That’s a good question, because before I got into this, that was the buzz around town. “Marvel’s very hands-on. They’re going to be part of the process every single step.” I don’t know if it’s a credit to Steven or to Marvel, but they were great on allowing us to go with our vision and do what we wanted, and they were very supportive.

There were a lot of eyes [and] a lot of ears on it, but they were supportive with the vision Steven had. There was definitely no micro-managing. They had a lot of trust with Steven and his vision as they do my new show-runners, Doug Petrie and Marco Ramirez. It’s been very much the same for Season 2.

What is Season 2 like musically? What’s different this time?

The challenge was, “How do we keep what we did in Season 1, but acknowledge we’re going into a greater universe now?” Season 1 is an origin story. Musically, if you’ve got a guy who’s in a jumpsuit anyone can buy, you can get away with not doing as much as you might need to do when a superhero suit gets put on. From a musical perspective I had to take that into account, now we’re dealing with Daredevil in his full form.

I think we did it. The stakes are up in Season 2. We have new characters, Elektra, Punisher, [and] you can feel the energy ramp up as the story goes and it’s a lot of fun. We have moments we lean on a more cinematic vibe, but I still wanted to make sure we were grounded. Even though Punisher and Elektra are in, these are still grounded characters because we’re still in Hell’s Kitchen. Matt Murdock, he’s still a lawyer. We’re still in that universe, there’s just a deeper story underneath.

What was your musical approach to Punisher (Jon Bernthal) and Elektra (Élodie Yung)? As you said, they’re fantastical characters in Murdock’s grounded world.

It was a challenge of trying [to] divide between these great characters from a musical perspective. There’s a lot of inter-weaving, between character themes and when they’re sharing time onscreen, and when they’re working with or against each other. There’s these different elements that kind of had to be figured out how to maneuver. There were challenges on many fronts, and they both have distinctive themes and elements brought in to tell their story.

It’s not like they were cameos, is my point. These are characters deeply involved in Season 2, deeply involved in The Defenders as a whole, so it wasn’t something we just had to think about for one or two episodes. These are integral parts and they had to be treated as such. It was a challenge.

Okay, so of course you’ve seen all of Season 2 by now. Level with me: How awesome is Jon Bernthal as The Punisher?

[laughs] Yeah. He’s my favorite. I’ll just say this: He’s my favorite character out of everyone. This role is made for him. When I look at him now on anything else, all I see is Punisher. I remember watching Sicario after Season 2 was halfway through, and I couldn’t even get into him in that role because he just is so good as Punisher, you don’t want to see him as anything else.

Looking back, what’s been your favorite scene to score in all of Daredevil?

I love the hallway fight in episode 2, because to get this job I had to demo that scene. It was the first footage I saw, and the stakes were high because I had to a demo for that. There were other composers involved and we were all [trying] to get the job. They gave us three or four scenes we could choose from, and I chose that. So that scene has a special place for me.

My colleague wrote how streaming TV has the best theme songs, especially since broadcast has kind of ditched them. What can you tell me about making the Daredevil title?

It was an awesome experience. It was one of the first themes I was able to do as a true main title, which was awesome. The musical idea really came from the visuals, done before the music was and that’s kind of unusual these days.

The theme came from another scene I had done from episode 2 for that demo, like the B section to the hallway fight. That turned into our Daredevil/Matt Murdock theme, and it just happened to work great as a remix for the main title. It worked out fantastic.