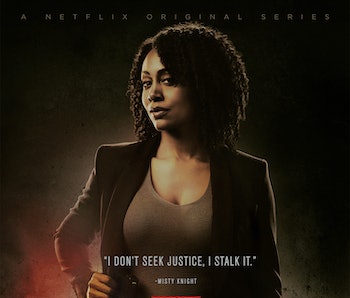 Hard-boiled cop Misty Knight — who is debuting in Luke Cage on Netflix when it premieres September 30 — is also set for Marvel’s crossover series The Defenders, as confirmed by actress Simone Cook, who joked about potentially being fired.

“I believe Im safe to say that I will be on The Defenders,” said Cook. “Spoiler alert! If I lose my job because of this interview, sorry!”

Misty Knight debuts in the Marvel Cinematic Universe in Luke Cage on Netflix. Knight is an NYPD detective that investigates reports of a Harlem hero — Mike Colter’s Luke Cage. She dates Cage in the series and in the comics, although Cage eventually marries Jessica Jones in the latter source.

In the comics, Knight gets a bionic arm with the help of Tony Stark and opens up her own detective agency. There’s quite the entrepreneurial spirit in this side of Marvel: Both Jessica Jones and Misty Knight run superhero agencies to earn a living.

Also notable from the comics is Misty’s partnership with Colleen Wing, another hero that’s associated with Iron Fist. After his own solo series next year, Iron Fist will join Daredevil, Luke Cage, and Jessica Jones in The Defenders. With Misty Knight on board for The Defenders, perhaps Colleen Wing (played by Jessica Henwick) isn’t far behind, meaning The Defenders is going to be straight up stacked.