What would happen if the polar ice caps melted?

“The number of people that would be affected by this is about 40% of the world population.” 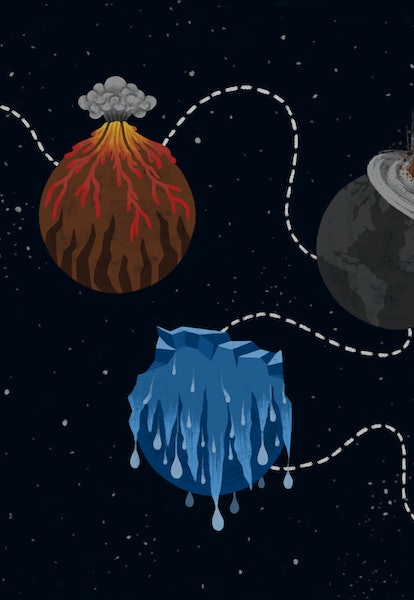 When we talk about the polar ice caps, we’re talking about the massive layers of ice and snow that cover Antarctica, Greenland, and portions of Canada and Russia.

It’s normal for Arctic ice to melt and break off from glaciers in a process called calving, but the rate at which both are occurring is outpacing the production of new snow and ice, Mathieu Morlighem, a glaciologist and associate professor of Earth system science at UC Irvine, tells Inverse. The first thing to do, though, is to stop panicking, because it will take longer than a century for the polar ice caps to melt completely. But what if we sped things up just a little?

Inverse spoke to Morlighem about how the ice caps melting could hypothetically transform the Earth by 2121. His response has been edited and condensed:

“It’s not going to happen, even over 100 years — it will take thousands and thousands of years, but it’s still a good question to ask because the world isn’t going to end in 2121. We think that if Greenland were to melt today, sea level would rise globally by 7.4 meters, and Antarctica is another 58 meters. So that's a total of 65.4 meters, which is 215 feet. And it's not going to be uniformly distributed around the globe because of gravitational attraction. We'll have sea level fall around Greenland and Antarctica, but rise everywhere else.

“Entire nations are going to disappear.”

The number of people that would be affected by this is about 40% of the world population because they’re within 250 feet of high tide. Generally, we say that it costs $1 trillion per meter of sea level — so it's about $65 trillion. Entire nations are going to disappear. Pacific islands, they’re gone. Who is going to take care of these people? They need to have a place to live, and they have a culture.

One important thing that will happen is groundwater contamination. If the sea level is rising, there is going to be infiltration of saltwater in groundwater reserves further inland. So even though you may think that you're safe because you are higher than 250 feet, your well may now be contaminated and you can’t irrigate because it's salty water.

Another thing already happening is that thermohaline circulation may be affected. Also called the Great Conveyor Belt, this moves heat around from the equator to higher latitudes. We may already see a slowdown of that circulation because we're putting too much freshwater into the Arctic. So if that happens there would be no more Gulf Stream. Europe will be as cold as Montreal. Temperatures in Europe would plummet and there would be a sort of mini Ice Age.

“There are also lots of toxic chemicals in the ice sheets and in some of our mountain glaciers.”

There are also lots of toxic chemicals in the ice sheets and in some of our mountain glaciers — in the Himalayas, for example. We know there are chemicals like DDT, and we are really worried that these chemicals will be released into rivers and into drinking water. During the Cold War, there was a military base in northern Greenland called Camp Century. They dumped a lot of nasty chemicals and radioactive material in this region and they left the base — it's under the ice, but as the ice is melting. It is going to be exposed, and we don't know what's going to happen.

One other interesting effect is if you melt the ice, that will affect the Earth’s rotation. It may actually change how long a day is. The ice sheets are close to the axis of rotation of the Earth — they are around the poles. You melt this ice, and where this water will go is around the Earth, so further away from the axis of rotation. So the Earth is going to spin at a slower rate. It’s hard to quantify, but probably 10, 20 seconds longer for a day.”

Inverse asked a series of experts about five different scenarios for our planet by 2121. Read the rest: a supervolcano explodes, an asteroid impact, a pandemic wipes out 10 percent of humanity, and humans stop global warming.