What would happen if a pandemic killed 10 percent of humans?

“We can barely even handle a pandemic that has a 0.5 percent mortality rate.” 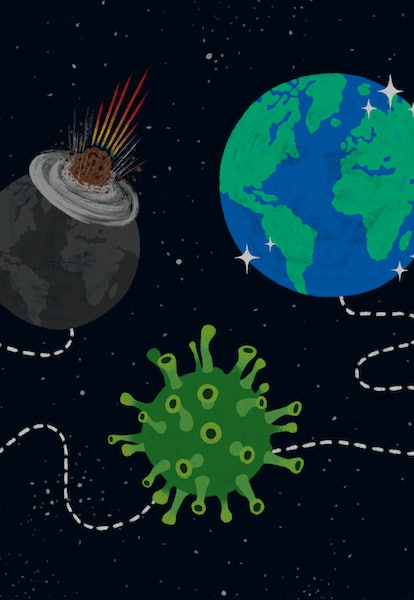 Until this past year, the risk of a deadly pandemic seemed looming, but not imminent.

Covid-19 has shown us just how serious the threat of an emerging infectious disease can be — and just how underprepared we are to handle another like it. Amesh Adalja, a senior scholar at the Johns Hopkins Center for Health Security and an infectious disease critical care and emergency medicine physician, tells Inverse that it’s unlikely future pandemics will ever reach the toll on human life caused by something like the Black Death. Still, a disease with even a fraction of plague’s mortality would be a global concern.

Inverse spoke to Adalja about how a deadly pandemic could transform the Earth by 2121. His response has been edited and condensed:

Many people think about pandemics as extinction events for the human species, but it's highly unlikely you find a pandemic able to do something on that level. Our mitigation efforts, as well as idiosyncrasies in the human immune response, are likely to leave some segment of the population able to withstand the infection. It's much more valuable to think about infectious diseases that have mortality rates of around 20 percent.

But you don't need an outlandish scenario to realize the importance of infectious diseases. We can barely even handle a pandemic that has a 0.5 percent mortality rate, so you need to get to those cataclysmic levels to really end up having a de facto cataclysm because of human errors.

“You would see cascading impacts throughout industrial civilization.”

If a pandemic killed at least 10 percent of the population, you would see cascading impacts throughout industrial civilization, but it depends on a lot of factors. What is the average age of the person that dies? If it’s 72, it's very different than 19. If it's killing people in the prime of their life, the way HIV did in many African countries, it's a much bigger shock than if it's killing people who are elderly.

Most infectious diseases aren't uniform, as we've seen with Covid-19. The average age of death plays a major role in how resilient society may be to it.

I don't think the next pandemic will be caused by bacteria, even if it was a multidrug-resistant bacteria. Even when they don't work, antibiotics are usually able to put something together. It's a false assumption to say bacteria are going to do all this and we're going to do nothing. Human progress and human knowledge will have expanded in 100 years in ways I can't even imagine.

So who's to say that we were not ahead of the game because we've developed more vaccines against bacteria. That we've gotten new therapeutics. We've developed bacteriophage therapy. We've gotten much more sophisticated medical care in 100 years. I don't think that you can say if it's an arms race that only one side is going to be engaged in it and that we're going to stay static.

Inverse asked a series of experts about five different scenarios for our planet by 2121. Read the rest: the ice caps melt, an asteroid impact, a supervolcano explodes, and humans stop global warming.