What would happen if a giant asteroid hit the earth?

“Not everything will die.” 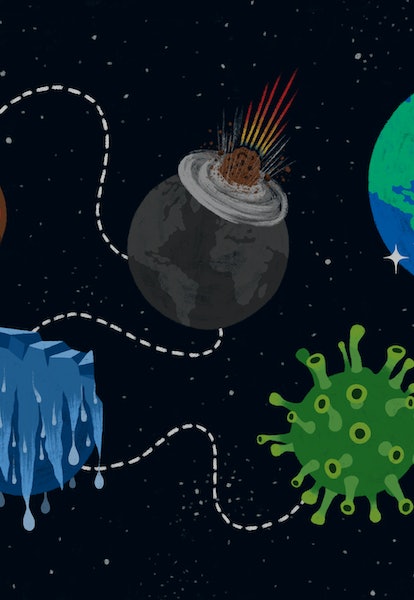 Whenever we see a shooting star, that’s a meteorite the size of a grain of dust hitting the Earth.

But what if something much larger, around 10km across (the size of the asteroid that wiped out the dinosaurs) collided with our planet? Such events are extremely rare. They only happen every 50 million years or so, Britt Scharringhausen, an associate professor of physics and astronomy at Beloit College, tells Inverse. But the impact of such an impact would be devastating.

Inverse spoke to Scharringhausen about how a giant asteroid would transform the Earth by 2121. Her response has been edited and condensed:

“Within the first few hours after the impact, it really quickly turns the Earth into this horrible scorched hellscape.”

All of the ash from the fires and all of the finer-grain debris from the impact will hang out in the atmosphere for a long time, and we get what’s called an impact winter. It’s going to block the sunlight, and all that ash falling into the ocean acidifies the top layers. So you burn things, kill everything in the ocean, and freeze the Earth, and it goes through about two years of constant winter.

“The way to survive would be to get underground.”

Not everything will die. If we’re thinking about people, the way to survive would be to get underground. You could maybe ride it out in a bunker if you've got the supplies to make it through that period of winter where you can't grow any edible food. Maybe the finicky crops that humans like to grow won't come through it so well, but there’s that seed repository, so if those are well-protected enough, you could get agriculture restarted.

There would be acid rain everywhere, so you’d have to deal with the acidification of the soil. And there would be this fine layer of clay made up of tiny spherules of molten asteroid and molten rock from the Earth's crust and ash.

We're talking a mass extinction. The things that survive are the things that are small. The Chicxulub impact was what cleared the way for mammals. It got rid of all those giant sauropods so that the little shrews and moles could evolve into a wide variety of new forms. Who knows what the big champion would be after this impact — maybe this time it'll be cockroaches.

If you want to transport extraterrestrial life to Earth, you’d probably want a small rock. It's unlikely something like that would take over the Earth because most of that stuff is well-adapted to the environment that it lives in; if you just drop it into another environment, the odds of it outcompeting what's already there are pretty low.

Then again, we’re throwing a big wrench in the works when we have an asteroid impact, so local life is going to be struggling to claw back. Disrupted environments are often where we find invasive species, and you’re creating a global disrupted environment: dumping an alien bacteria into it could make things get a little hairy.

We as humans have a lot of tools in our toolbox for forcing evolutionary changes — selective breeding, genetic modification. The asteroid will have wiped out the industrial base. If we could salvage the technology that we need, we could maybe recover lost species. We could maybe produce new species that would be able to live in the new environment and accelerate the return of the Earth to a stable equilibrium biosphere. It’s a dangerous experiment, but we might be in a position where it's the choice between a dangerous experiment or everybody starving to death.

What would it do to global warming? You're going to drastically reduce the human population on the Earth, so you’ll cut down on our production of carbon dioxide, but then you’re also setting everything on fire. By stopping anthropogenic climate change, it would probably be good for the survivors, but you have to keep in mind that it's probably not the best way to get down our carbon emissions.”

Inverse asked a series of experts about five different scenarios for our planet by 2121. Read the rest: the ice caps melt, a supervolcano explodes, a pandemic wipes out 10 percent of humanity, and humans stop global warming.