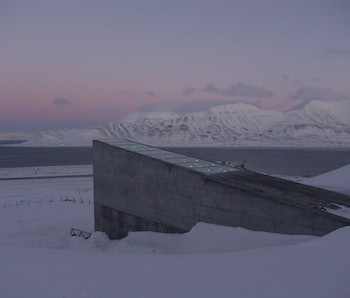 What tools will you grab when the world ends? Perhaps you’ll reach for your AR-15 and tactical gear in the hopes of defending your property, or maybe you’ll take the longer view and hoard water. If you forget to bring enough food, the Svalbard Global Seed Vault has got your back — that is, assuming the massive concrete bunker lasts until then. We built this massive global seed “Doomsday” vault on a remote island between Norway and the North Pole because of the very real concern that we might all starve someday, but in the face of climate change, the seed bank itself is endangered.

That’s why its keepers decided last week it needed an upgrade. On Friday, the Norwegian government announced its proposal to allocate almost $13 million to reinforce the building and upgrade support equipment. It’s a small price to pay to protect the seed bank — which holds a variety staple grains, beans, and nuts, as well as a variety of rare and experimental crops — from the flooding due to melting polar ice.

Poised to rebuild the world’s crops in the event of a global catastrophe, the vault is even more precious now than it was when it was built 10 years ago, seeing as it recently received 70,000 more seed samples, bringing its grand total to over 1,059,646 seeds from all over the world.

The allocation of the funds is a response to the threats that the stronghold has already experienced in its short lifetime. Though it’s built to withstand the ravages of time and whatever else humans can throw its way, it actually partly flooded in 2017 when permafrost melted. Fortunately, the flooding only affected the entryway to the vault and didn’t penetrate far enough to endanger the seed chambers, but it was enough to freak everyone out.

The thing is, the vault was built in such a remote polar area not only because it’s remote but also because the permafrost surrounding it is supposed to remain frozen forever — hence the name “permafrost.” But in the ten short years since the facility was constructed, global climate change has shown that we can’t rely on permafrost to stick around. As such, the Norwegian government had its management company, Statsbygg, conduct a feasibility study to see what the Global Seed Vault will require to survive. In addition to waterproofing, which has already been fitted, Statsbygg recommended ground cooling systems, which will be bolstered by an enhanced emergency power production facility and upgraded electrical systems.

Climate change isn’t the only threat to the Svalbard Global Seed Vault, though. Geopolitical conflict has shown that the seed bank may be a short-term strategy, not just a savior for some far-off future. In 2015, for example, the Syrian civil war forced the doomsday seed bank to open early to help replenish the stores at the Aleppo seed bank in Syria, which was damaged in the conflict.

The new upgrades to the Svalbard Global Seed Vault should help it last into the future, and at the rate climate change is accelerating — and human conflict is continuing — we may very well need to revamp it again sooner than we think.