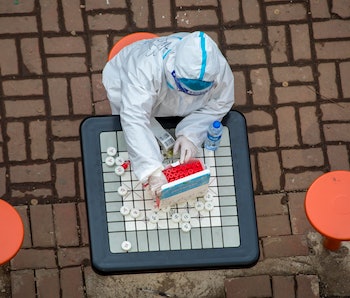 How has Covid-19 irreversibly changed your life? Here in New York, it’s no longer mandatory to wear a mask in public. Although I’ve been warily refreshing Google for the latest case count, if you look at the city from a distance, you might say things are finally looking back to normal.

But nothing will ever really be the same — especially medicine. To that point, Inverse recently spoke to biomedical scientists creating DIY Covid-19 tests — you can read that slightly dystopian story in today’s newsletter. And stick around to the end for our weekend sendoff. I hope it helps take your mind off of… everything!

This is an adapted version of the Inverse Daily newsletter for Friday, March 11, 2022. Subscribe for free and earn rewards for reading every day in your inbox. ✉️

The rise and fall of an ‘open-source’ Covid-19 test

Some people wish for a world where medicine isn’t limited to laboratories and pharmacies but is possible to do at home, yourself, with only what you have in your fridge or cabinet. Sarah Ware, Ellen Jorgensen, and Chris Monaco are some of those people, and in 2020, they hoped to realize that wish by building and distributing a do-it-yourself PCR test.

They got halfway there.

“Ware, Monaco, and Jorgensen’s group created the ‘One Hour Covid test’ — a PCR test that involves a saliva sample, two reagents, and a hot water bath; and delivers results in under an hour,” writes Emma Betuel. But they “failed to make their open-source test available to the public or gain regulatory approval.”

You may have already experienced the benefits of an at-home, rapid Covid-19 test compared to waiting in the long lines spilling out of testing sites during spikes. At-home tests are easy, convenient, and democratic. But there are institutional and logistical barriers to creating your own medical devices, all of which the One Hour Covid test creators bumped into — hard.

Betuel writes that “invoking the 1989 film Field of Dreams, [Jorgensen] jokes: ‘We thought naively: if you build it, they will come.’”

Up yours: Has Covid-19 changed our relationship to drugs?

Scientists don’t totally understand parthenogenesis, or reproduction with an unfertilized egg, but recent findings in the Proceedings of the National Academy of Sciences provide rare insight into how the process works within mammals.

Using mice, the researchers behind the study “used what’s called epigenetic rewriting techniques — a method that does not change the actual DNA in an animal but rather alters gene expression and activity — to create unfertilized parthenogenetic embryos without male sperm,” writes Inverse nature reporter Tara Yarlagadda.

“After transferring the embryos to female mice, the scientists were able to bring one parthenogenetic mouse to adulthood, which then successfully reproduced — with a male — to create viable offspring.”

Though one virgin mouse birth may sound like a miracle, “researchers are quick to note that their procedure for generating parthenogenetic mammals isn’t extremely effective,” writes Yarlagadda. Only one offspring survived out of hundreds — still a compelling chapter in the mouse Bible, but further research is necessary before parthenogenesis can lead to infertility treatments and other uses for humans.

How do you like your eggs?: Human evolution theory debunked by eggshells

NASA has an aging hardware problem

Just like you may hold onto a precious rare wine, NASA keeps the lid on its spacecraft. But unlike wine, a spacecraft doesn't necessarily get better with age. The past few decades are studded with minor failures — an International Space Station battery quit in 2019, a Chandra X-ray Observatory glitch just this February — but as the years blow on, writer Nathaniel Scharping argues that “the threat of catastrophic failures grows more pressing.”

In part, this is due to NASA goodies being kept way past their expiration date. Chandra, for example, was launched in 1999 with a five-year shelf life. It’s been in space for the past 23 years.

Of course, old can be gold — Scharping says that the “spacecrafts’ durability is a testament to the exacting specifications of NASA engineers, and it’s often been a boon to the space agency, not to mention scientists hungry for more data on the universe.”

But scientists have concerns. “Prolonging the lifetime of spacecraft only increases the chance they might break irreparably, something that becomes more worrying as new telescopes take longer and longer to build,” writes Scharping. “That’s especially true for NASA’s flagship space telescopes, like Hubble and the recently-launched James Webb Space Telescope. Each telescope has different goals and capabilities.”

The old spaceship home: Why NASA dumps its trash in the middle of the ocean

Weekend sendoff: This sci-fi series is an anti-capitalist thriller

This weekend, we at Inverse think you should check out the second season of Upload, the Amazon series made by The Office co-creator Greg Daniels. When Upload first debuted on Prime Video in 2020, Inverse senior entertainment reporter Eric Francisco says it provided “a fun and funny way of orienting ourselves to an increasingly unfunny world.”

“With cutesy humor and the charisma of handsome leads, Upload was profoundly resonant without the uneasy tensions of so-called more important shows,” Francisco writes. In the show’s sophomore season, it retains the ability to “both amuse and forebode, as it’s set in a quietly dystopic future, where people have long sacrificed authenticity for artificiality for the sake of convenience,” writes Francisco.

Though round two is not necessarily as good as round one, Francisco maintains that Upload “is still delightful and worth the weekend binge.” Click below to read the rest of Francisco’s review, and be sure to let us know if you decide to watch the show yourself.

More like this
Science
Jan. 26, 2023
An asteroid will come within 2,200 miles of Earth tonight — here’s why you shouldn’t worry
By Jennifer Walter
Science
Jan. 26, 2023
Scientists find two key ingredients for life in ancient meteors
By Jeff Nagle
Science
Jan. 25, 2023
40 years ago, NASA launched the space telescope that proved JWST could work
By Jon Kelvey
LEARN SOMETHING NEW EVERY DAY.
Related Tags
Share: