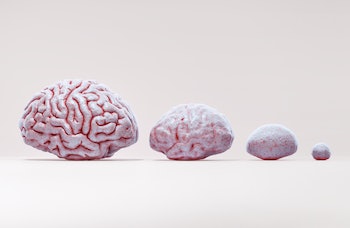 Between 75,000 and 125,000 years ago in Africa, coastal dwelling Homo sapiens were splashing about in watery paradise — collecting shellfish to nourish their brains, storing water in ostrich eggshells, and decorating artifacts in their spare time.

That’s the scenario scientists hypothesize. When it comes to the ancient humans living inland, however, scientists haven’t historically been so generous.

While the enlightened coastal dwellers thrived, some scientists argued that humans on the interior lagged behind, both socially and cognitively. However, a new series of unassuming artifacts uncovered over 370 miles inland suggests we’ve been selling them short for about 100,000 years.

This is a 970,000 square mile area of southeastern Africa that spans sections of Botswana, Zambia, South Africa, Zimbabwe, and Namibia. The objects were found near a rock shelter site just north of the South African edge of the basin at a site called Go-Mohana hill. Those finds date back to 105,000 years ago.

These finds suggest the humans who lived on Go-Mohana hill were “behaviorally modern” – a term used to describe the social and cognitive abilities that allow us to use symbols to communicate and create technology.

The objects also overturn the idea that humanity needed coastal living to become “behaviorally modern,” explains Jayne Wilkins, a paleoarchaeologist at Griffith University, and the paper’s first author. The overlooked people of the Kalahari were doing well in their own right, suggesting that humanity was developing modern characteristics in many places at once.

“Ultimately, this means that models that focus on one single origin center, like the coast of South Africa, are too simplistic,” she tells Inverse. “The coast probably was important, but so were many other regions and kinds of environments.”

Digging into the details — The crystals and egg fragments were buried 1.6 meters below the surface, and were last exposed to sunlight about 105,000 years ago.

The scientists determine this by measuring ionizing radiation in the sediment. This suggests that these objects had been untouched since that date. From there the team systematically ruled out the idea that they had been brought there by anyone other than ancient humans.

“... models that focus on a single origin center, like the coast of South Africa, are too simplistic.”

The crystals were visually striking, but soft – probably too soft to have been used as tools, the study team explains. There were also no signs of any other source of calcite crystals in the immediate area, but there was a nearby source about 2.5 kilometers away.

This suggests humans brought the crystals there, perhaps as a sign of symbolic behavior. If the crystals were used as ornaments it’s a sign that their owners could aesthetically appreciate something that’s useless as a tool — a complex set of thoughts for beings struggling to survive. Humans on the coast also collected marine shells perhaps for this same aesthetic purpose, previous studies have noted.

Before this find, no crystal collections had been unearthed at an inland settlement older than 80,000 years old.

The ostrich eggs, on the other hand, probably served a utilitarian purpose. The shells were found in the shadows of a large rock shelter, suggesting that humans were already living there. There were likely no traces of hyenas in the area who might have brought the shells to the rock. And, considering that coastal ancient humans were also using ostrich egg shells to carry water at this point, it seemed natural to suggest these people did so too.

These finds “show us that humans in the Kalahari were as innovative as their coastal counterparts,” says Wilkins. “They did not lag behind coastal populations with respect to cognitive or social or technological capacities.”

Why does this matter? — These finds pose bigger questions about how advancement happens in the first place. A key ingredient, even in this new model, seems to be living near the water — but not in the way that scientists initially thought.

One working theory is that access to marine nutrients has helped humanity’s especially large brains evolve, and that access to seafood and coastal resources may have facilitated complex modern behaviors — like symbolism or creating sophisticated tools.

The finds in the interior suggest that humans who lived away from the coast still managed to keep intellectual pace, which challenges this view, Wilkins adds. However, the paper doesn’t discount the effects of water altogether.

Analysis of historical climate data reviewed by this team suggested that the area around the basin, now arid, was once actually filled with shallow pools of standing water and even running stream water, forming a “wet savannah.” The resources of a wet savannah may have supported human populations, and given them the resources needed to thrive away from the coast.

“Kalahari is generally considered too arid for early human populations to really thrive there,” says Wilkins. “Our result quashes this idea of a dry and empty interior, with people only able to thrive in coastal environments.”

These findings add evidence to a new theory of how humans became modern, Wilkins says. Instead of originating in one place, humans thrived in separate environments (coastal and otherwise). They might have shared information and genes, and all together, became the people we are today.

Inland ancient humans deserve some credit for their part in the story — credit that they’ve been denied for a couple hundred thousand years.

Abstract: The archaeological record of Africa provides the earliest evidence for the emergence of the complex symbolic and technological behaviors that characterize Homo sapiens1–7 . The coastal setting of many archaeological sites of the Late Pleistocene epoch, and the abundant shellfish remains recovered from them, has led to a dominant narrative in which modern human origins in southern Africa are intrinsically tied to the coast and marine resources8–12, and behavioral innovations in the interior lag behind. However, stratified Late Pleistocene sites with good preservation and robust chronologies are rare in the interior of southern Africa, and the coastal hypothesis therefore remains untested. Here we show that early human innovations that are similar to those dated to around 105 thousand years ago (ka) in coastal southern Africa existed at around the same time among humans who lived over 600 km inland. We report evidence for the intentional collection of non-utilitarian objects (calcite crystals) and ostrich eggshell from excavations of a stratified rockshelter deposit in the southern Kalahari Basin, which we date by optically stimulated luminescence to around 105 ka. Uranium–thorium dating of relict tufa deposits indicates sporadic periods of substantial volumes of fresh, flowing water; the oldest of these episodes is dated to between 110 and 100 ka and is coeval with the archaeological deposit. Our results suggest that behavioral innovations among humans in the interior of southern Africa did not lag behind those of populations near the coast, and that these innovations may have developed within a wet savannah environment. Models that tie the emergence of behavioral innovations to the exploitation of coastal resources by our species may therefore require revision.

More like this
Science
6 hours ago
‘Golden Boy’ mummy CT scans reveal 2,300-year-old burial traditions
By Robin Bea
Science
Jan. 22, 2023
Humans didn’t evolve to live in cold — our survival is a lesson in ingenuity
By The Conversation, Kyoko Yamaguchi and Laura Buck
Science
10 minutes ago
65 Years Ago, America Launched Its Most Pivotal Space Mission Ever
By Jon Kelvey
LEARN SOMETHING NEW EVERY DAY.
Related Tags
Share: