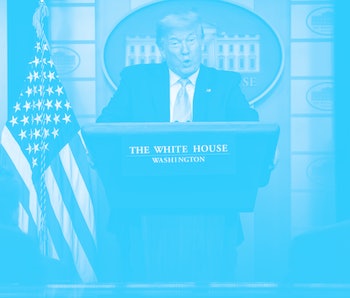 Chloroquine, and its slightly less toxic derivate, hydroxychloroquine, have been hyped as possible treatments for Covid-19, endorsed by big names like President Donald Trump and entrepreneur Elon Musk. Now, after an astronomical rise, the hype is fading as quickly as it emerged.

The outlook for these drugs has taken a turn, suggests a scientific review released Thursday.

The review, published in the FASEB Journal, an academic journal on experimental biology, cautions that chloroquine and hydroxychloroquine should not be used to treat coronavirus patients unless these patients are enrolled in a clinical trial.

This conclusion is partially based on an analysis of 10 studies that examined the effect of each drug on patients with Covid-19. The team also analyzed four studies that on how cells infected with SARS-CoV-2 (the virus that causes Covid-19) responded to the drugs, as well as cell model studies where the same drugs were used on SARS, H1N1, and H3N2.

Senior author Mark Poznansky, the director of the Vaccine and Immunotherapy Center at Massachusetts General Hospital, tells Inverse that if chloroquine and hydroxychloroquine are used outside of a clinical trial, scientists must carefully weigh the proposed benefits against negative consequences.

"We put this [review] together very rapidly because we felt this could have an impact on the way the drug is being used," Pozansky says.

In the time since they began the review, Pozansky has already noticed a change: "Now, all the hydroxychloroquine I know is being used in a trial or not at all."

In late March, there were few drugs that appeared to be promising Covid-19 treatments. Two that emerged quickly from relative obscurity were chloroquine and hydroxychloroquine, both used to treat malaria, lupus, and rheumatoid arthritis. They were used in China to treat Covid-19 in February and then gained notoriety due to social media hype surrounding a small study in France. Subsequently, they were been used off-label to treat coronavirus by some doctors in the United States.

Now, with increasing evidence that the drugs are not as effective as once thought, some proponents of the drug are unwilling to adjust their thinking.

There are still ongoing clinical trials looking into the effects of hydroxychloroquine and chloroquine. But the issue, when comparing these drugs to remdesivir, is that they have not been evaluated by the gold standard of science: a randomized controlled clinical trial. Remdesivir has.

"Our passion has to be directed by data, especially carefully compiled data," Poznansky says. "That's why clinical trial systems were established in order to lead to data-informed decision making by doctors, and patients and the public, as opposed to just being led by the forum of public opinion alone."

During this burst of attention, Poznansky was treating severe Covid-19 patients. He noticed that, seemingly, more and more patients were being treated with these drugs. The patients, he says, were not faring particularly well (though it's unclear why).

"As a physician, I was just like 'do we know what this is doing?" Pozansky reflects.

His review centers on a critique of how chloroquine and hydroxychloroquine actually work. There could be both positive and negative consequences that we have not considered.

Increasing acidification can also limit the overproduction of cytokines, signaling proteins that the immune system uses to recruit cells. These cytokines can also trigger local inflammation. When that inflammation gets out of control it can cause a "cytokine storm" – a hallmark of severe Covid-19 cases.

In that sense, these drugs may be helping patients by dampening that dangerous immune system overreaction, but this can only be confirmed through clinical trials.

But Pozansky's review also suggests that these drugs may impair the immune system too, which could stop it from fighting the virus off in a positive way. It's possible that hydroxychloroquine can hold back natural killer cells from doing their job — killing cells infected with the virus.

These results, while not conclusive, offer "significant pause for thought," Pozansky says.

"Those mechanisms that it is suppressing are known to be quite critical for your antiviral response," he explains.

Still, the review doesn't argue that chloroquine and hydroxychloroquine should be forgotten entirely. It argues that they need to be studied in trials first because there could be negative effects that we're missing.

This jibes with other research, and anecdotal evidence, claiming the drug's side effects have been underestimated. One Swedish hospital has halted its use of chloroquine, citing more serious side-effects than anticipated and concerns over how the drug may affect patients with heart conditions.

More recently, an arm of a Brazilian randomized, controlled clinical trial on chloroquine was halted when, the write, "the risks of toxic effects overcame the benefits."

These drugs have been used safely for decades to treat other conditions. But the idea that they can treat coronavirus is still tenuous and wrought with conflicting reports.

For now, Poznansky adds that we should keep them on the table, but continue to follow the evidence, wherever it leads.

Partial abstract: There are currently no proven or approved treatments for coronavirus disease 2019 (COVID‐19). Early anecdotal reports and limited in vitro data led to the significant uptake of hydroxychloroquine (HCQ), and to lesser extent chloroquine (CQ), for many patients with this disease. As an increasing number of patients with COVID‐19 are treated with these agents and more evidence accumulates, there continues to be no high‐quality clinical data showing a clear benefit of these agents for this disease. Moreover, these agents have the potential to cause harm, including a broad range of adverse events including serious cardiac side effects when combined with other agents. In addition, the known and potent immunomodulatory effects of these agents which support their use in the treatment of auto‐immune conditions, and provided a component in the original rationale for their use in patients with COVID‐19, may, in fact, undermine their utility in the context of the treatment of this respiratory viral infection.

More like this
Science
6.16.2022 10:00 AM
Climate change and air pollution are wrecking children’s health, a landmark review reveals
By Tara Yarlagadda
Science
6.12.2022 1:30 PM
A fatal bunny disease is rampaging through the U.S. — here's what you need to know
By Tara Yarlagadda
Science
6.11.2022 7:00 PM
Research on a deadly bacteria might be a Covid-19 vaccine gamechanger
By Fiona Smaill and The Conversation
Related Tags
Share: