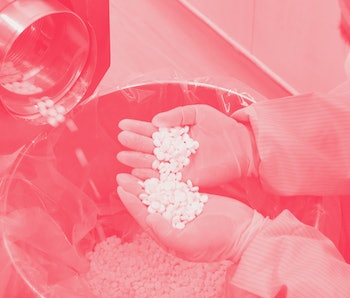 We don't have a verified drug treatment for Covid-19 yet, despite scientific efforts to find one. Still, you've likely heard of two drugs cheerleaded by the White House and trending on Twitter: chloroquine and hydroxychloroquine.

These drugs are already used to treat other conditions like lupus, rheumatoid arthritis, and most famously, malaria. Hydroxychloroquine is a less toxic derivative of chloroquine — both drugs have similar structures but have different chemical and biological properties. The drugs are also promoted by President Donald Trump as Covid-19 treatments, despite clear that evidence they work in this context.

When it comes to these anti-malarial drugs as treatments for Covid-19, some members of the scientific community urge caution. This includes Dr. Anthony Fauci, chief of the National Institute for Allergy and Infectious Diseases, who has warned that we can't definitely say the drug works against the coronavirus.

In the two weeks since the President first touted chloroquine and hydroxychloroquine, and the story behind the drugs have taken some increasingly wild turns.

That story reached a pivotal point April 7, when the Centers for Disease Control and Prevention quietly updated their guidance on the drug. As of April 8, the agency's website had removed information about the drug's use, and replaced it with a link to clinicaltrials.gov, a database of all clinical trials.

That story is broken down below into four crucial questions: Why are people so hopeful about the drugs, how are they currently being used, what do they actually do to the body, and what is their future?

Why are we talking about these drugs now? — The President's comments regarding the drugs came just days after the circulation of a Google document on social media. That doc was a forerunner of a small French study published on March 20 in the International Journal of Antimicrobial Agents. It investigated the use of hydroxychloroquine on 20 patients with Covid-19.

In six patients, that study found that a combination of hydroxychloroquine and azithromycin (an antibiotic) helped clear the virus from their system after just six days. However, the results of that study have been called into question.

On April 3, The International Society of Antimicrobial Chemotherapy, who runs the journal, issued a statement stating that "the article does not meet the Society’s expected standard."

This small study is not the only study on these drugs and the coronavirus. A non-peer reviewed randomized study listed MedRxiv on March 31 found that hydroxychloroquine did help people. They found that 5 days of hyroxychloroquine treatment shortened duration symptoms like cough and fever in a group of 31 patients who received the drug.

But, as a whole, the research on chloroquine and hydroxychloroquine as a treatment for Covid-19 is still "inconclusive" says Jinoos Yazdany the chief of Rheumatology at Zuckerberg San Francisco General Hospital.

"The drugs are getting more attention than is currently warranted by the level of evidence," she tells Inverse. "It is important to remember that many potential therapies are being investigated for COVID-19, including various anti-viral and immunomodulating therapies."

Does the CDC recommend hydroxychloroquine and chloroquine?

On April 7, the CDC's website changed its language on the use of hydroxychloroquine and chloroquine to treat coronavirus. The agency deleted all information about how the drug is currently being used in certain US hospitals to treat Covid-19. The agency also removed mention of a seemingly flawed March 2020 study on the drug's effectiveness as a therapeutic.

The Food and Drug Administration has approved both drugs for emergency use in people with Covid-19 who do not respond to other treatments. As of April 8, that status remains in place despite the changes to the CDC's website.

The drugs have also been added to treatment guidelines in other countries like South Korea, Belgium, and China. Those guidelines, though, are continuously being updated as scientists learn more about the drugs. For instance, China now recommends a lower dose of chloroquine than it did when the drug was first added to the guidelines in early January, according to a report published in The Lancet Rheumatology.

Finally, there's been some confusion about whether the drugs could be used in a preventative way, in other words, to protect against the coronavirus. (The authors of the small, flawed study in France made that case) — a step that Yazdany cautions against.

"There is no evidence to support indiscriminate prescribing to the general public for prevention of Covid-19," says Yazdany.

There likely is enough supply of the drug to treat those in hospitals who lack other options (like the FDA allows), Yazdany notes. But widening the scope could impact the supply for people who need those drugs to fight autoimmune diseases like lupus. After the President's comments, the demand for chloroquine increased 300 percent week-over-week and the demand for hydroxychloroquine increased 70 percent week-over-week, according to Premier Inc, a group drug purchaser for 4,000 hospitals

"This could deplete supply, put people at risk for adverse events, and cause dangerous shortages for people with rheumatic diseases," Yazdany says.

How does chloroquine work? — To treat conditions like rheumatoid arthritis, chloroquine can help calm an immune system that's prone to overreacting. For coronavirus, the drug works slightly differently.

Early studies suggest that chloroquine can increase the acidity of endosomes — little sacs that float in cell cytoplasm. That acidity, says Yazdany, stops the virus from entering the cytoplasm. In theory, that could stop the virus from hijacking our cells and forcing them to make more copies of itself.

On the flipside, the drug could stop the virus from entering the cell by messing with the ACE2 receptor. That's the landing pad that the virus uses to attach to our cells – it attaches itself using a "spike protein."

In previous studies focused on the SARS coronavirus, chloroquine appeared to make ACE2 receptors inhospitable. Research into how this may play out for this new coronavirus is ongoing.

Chloroquine and hydroxychloroquine are both powerful drugs, that come with powerful side effects. These can include nausea, abdominal pain, and skin rashes, Yazdany says. Taken in large doses, the drugs can lead to hospitalizations. This was the case in Nigeria, where health officials reported that three people had overdosed on chloroquine on March 23.

Further severe side effects can occur, Yazdany says. These symptoms tend to focus on the heart, where the drug can cause ventricular arrhythmias, cardiac toxicity, or a condition called Q-T prolongation. Q-T prolongation is a disturbance in the way the heart "recharges" its electric impulses and can lead to irregular heartbeats.

For those who are extremely sick, these cardiac effects may play a large role in determining the usefulness of the treatment. One hospital, the Sahlgrenska University Hospital infection clinic in Sweden, stopped using the drug as a treatment for Covid-19, citing more serious side effects than they initially anticipated.

What's next for chloroquine? — Those side-effects are something for individuals concerned about Covid-19 to consider when considering their health. In a briefing on March 5, Trump repeated his enthusiasm for hydroxychloroquine, and framed trying out the drug with the question: "What do you have to lose?"

That is what scientists are trying to figure out: The drugs are the subject of at least 23 trials in the United States. Chloroquine and hydroxychloroquine are also under investigation in the World Health Organization's SOLIDARITY trial. What comes next for the drugs, and whether they are really the cure we're hoping for, will depend on the results of those studies.

Update: 4/8/20 11:45 a.m: This story has been updated to include changes to the CDC's website's information on hydroxychloroquine and chloroquine.

More like this
Science
Jan. 22, 2023
Infection expert answers 7 top questions about Covid-19’s “Kraken” subvariant
By The Conversation and Sameer Elsayed
Mind and Body
Jan. 30, 2023
Swapping Cigarettes for Vaping May Help You Quit — but There’s a Catch
By Elana Spivack
Mind and Body
14 hours ago
Why Is My Skin Worse in Winter? 5 Conditions Dermatologists Watch out For
By The Conversation, Jeffrey Chen and Sonal Choudhary
LEARN SOMETHING NEW EVERY DAY.

This article was originally published on April 7, 2020