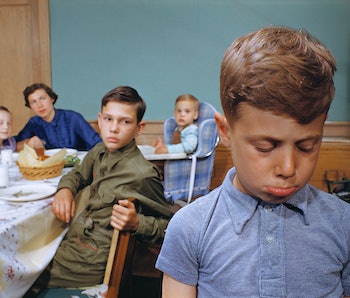 Consider the Jolly Green Giant. Cradling a pod of peas, or lugging a plus-sized ear of corn, it’s clear this guy has strength and stamina. A steady diet of vegetables has grown him to enormous proportions — but he has another thing going for him: a smile. “Jolly’s” even a part of his name.

There’s a reason why moms are always reminding us to eat our fruits and vegetables. Increasingly compelling research makes it hard to ignore the benefits: These foods don’t just benefit our physical health, they boost our mental health as well.

“This is the first study to look at the link between FV [fruit and vegetable] intake and stress across the adult lifespan,” Simone Radavelli Bagatini tells Inverse. Radavelli Bagatini is the lead author of the study and a PhD candidate at the Institute for Nutrition Research at the School of Medical and Health Sciences at Edith Cowan University in Australia. “We believe that eating more FV is likely to noticeably improve mental wellbeing.”

SCIENCE IN ACTION — Take a recent study published in the journal Clinical Nutrition. It looked at 8,689 Australians of all ages, who were part of a different, larger study, and asked them about the fruits and vegetables they were eating. The researchers also evaluated the participant’s stress levels.

It found that people who ate the most vegetables scored significantly lower on how they perceived their stress than those who ate the fewest vegetables by weight, which was estimated by the frequency they reported consuming them and standard portion sizes.

The bottom quarter of people (who ate less than 243 grams of vegetables per day) had, on average, 10 percent lower stress questionnaire values than the top quarter of veggie-eaters - who ate more than 473 grams per day.

Unlike previous studies that focused on younger adults, this one looked at a wide range of ages. It also asked about perceived stress, which is an important measure of how a person interacts with their environment — and something that impacts their well-being significantly.

This study jibes with past research: In 2019, scientists examined 45,000 individuals and asked participants to note how many portions of fruit and vegetables they ate on a given day. They were also asked to complete a mental health questionnaire. Certain portions of those people were also surveyed multiple times. Ultimately, it turned out that the people who ate more portions of fruit and vegetables and did so with more frequency reported higher scores of mental well-being.

A 2020 review of 61 studies on vegetable and fruit intake also found a high intake of fruits and vegetables can reduce psychological distress and signs of depression — while also increasing feelings of optimism and “self-efficacy.” Although many of the studies used varying methodologies and measured for different indicators of mental wellbeing, the overall conclusion is these foods are a positive influence.

HOW THIS AFFECTS LONGEVITY — It takes more than just avoiding diseases and being physically fit to live a long and healthy life. Physical and mental health are inextricably linked — so much so that it can seem odd that we’ve historically separated them.

For example, exercise is an accepted treatment for depression and anxiety, and it’s been shown time and again that close social ties and community allow people to live longer healthier lives.

Now, we’ve also gained a better idea of how many vegetables (and what kinds) you’ll need to reduce those stress levels. In the latest study, they found that at a minimum the WHO-recommended 400 grams reduced stress, but the people who ate around 500 grams of vegetables and fruits (about three medium apples, or 10 medium carrots) had the least stress.

But Radavelli Bagatini says that in future studies, they want to get even more specific. “This is the next step of our research, which will further explore whether specific intakes of types of fruits (i.e. citrus fruits) and vegetables (i.e. cruciferous, leafy greens) are more or less strongly linked to higher stress,” she says. “We also plan to investigate whether FV is more or less strongly associated with different types of stressors i.e. joy, demands, etc.”

And if we go back to the review of the 61 past studies, three kinds of fruits and vegetables stand out as the most beneficial in high amounts to feeling more optimistic and self-assured:

And a 2016 study on psychological well-being found that increasing vegetables and fruits by eight servings a day actually induces the same level of happiness as that felt when going from unemployed to working.

WHY IT'S A HACK — Research clearly shows there are mental health benefits linked to eating fruits and vegetables.

But the mechanisms behind their stress-relieving power are still relatively unclear. The new study’s authors, for example, write that vegetables and fruits are high in polyphenols and antioxidants like vitamins C and E — vitamins thought to reduce “oxidative stress” and inflammation. This may, in turn, reduce psychological stress.

The UK Biobank study included some of the same reasoning and added that vitamin B, which many fruits and veg are high in, could keep mitochondrial dysfunction in the body’s cells — a phenomenon previously linked to stress and anxiety — low. They also noted a “substitution effect,” where the consumption of more fruits and veggies might be taking the place of foods that are markedly detrimental to well-being: sugar, red meat, and so on.

So be like the Jolly Green Giant - eat your veggies, and you might finally get some inner peas (sorry).

More like this
Mind and Body
7.31.2022 2:00 PM
Four science-backed methods to feel less tired during the day
By Sarah Sloat
Mind and Body
8.1.2022 12:30 PM
Unripe bananas have a hereditary cancer prevention property — study
By Elana Spivack
Mind and Body
8.3.2022 1:35 PM
Is collagen worth taking? Scientists reveal the ideal method for building the protein
By Katie MacBride
Related Tags
Share: