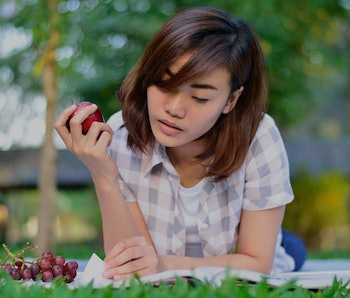 A diet to fight depression has eluded scientists for decades; research suggests poor diet is associated with mental health disorders like anxiety and depression, but can changing your diet really reduce these symptoms after you exhibit them?

A new randomized controlled trial on young adults shows that improving diet for a brief period, just three weeks, reduces depression symptoms and may provide long-term improvements in mood. The study, published Wednesday in the journal PLOS One, is the first of its kind to examine how changes in diet affect people with depression between the ages of 17 and 35. It’s a critical time period: During university, young adults are creating habits that last the rest of their lives. The way they eat during this formative period can lead to different health outcomes later in life.

The research pinpointed certain foods: healthy fats like olive oil or walnut oil, spices like cinnamon and turmeric, fresh fruits and vegetables, and fish. The results showed that all of these foods contributed to major improvements in depression. Researchers also found that reducing intake of processed foods — like cookies, fried foods, or so-called “junk foods” — may in fact matter more than upping intake of healthy foods like fruits, vegetables, fish, or whole grains.

The study included 76 university students who exhibited moderate-to-high depression symptoms and were eating poor diets. They divided the participants into a diet change group and a regular diet group that didn’t make any changes.

They even helped participants troubleshoot future problems with time and cost-saving, as well as social pressures, to help them incorporate these diet changes into their university lifestyles.

Researchers checked in with the students by phone twice over the course of the three-week study. Before and after the diet intervention, the team assessed participants’ scores for depression, anxiety, mood, and performance on several learning and reasoning tasks.

"Participants didn’t have to be strict with their diet to get the mood-boosting benefits.

Three months later, the researchers followed up and found that the participants who kept eating healthily maintained better moods than those who gave up the healthy diet or never tried it in the first place.

Surprisingly, the participants didn’t have to be strict with their diet; even with minor slips, they still retained the mood-boosting benefits.

This study follows abundant research examining the links between mood and food. It adds to a growing field of nutritional psychiatry — using food to help treat mental health disorders in addition to pharmaceutical medications and therapy. In past studies, diet on its own has been shown to stave off depression: Researchers have found that people eating a Mediterranean diet have a lower risk of developing depressive symptoms later.

The same diet goes beyond helping the brain; it also has a multitude of other health benefits, like weight loss, a healthier heart, lower cholesterol, lower risk of stroke, and reduced morbidity as well as mortality. Mediterranean dieters eat lots of lean meat and fish, plants, fruits and vegetables, olive oil, and nuts.

Further randomized controlled trials, on young people, would help confirm exactly how people should eat if they want to fight depression, as well as clarify what they should give up or add to their diets.

Eating healthier is no magic bullet, but it could be a strategy worth incorporating if you struggle with depression. It’s also relatively cheap compared to more intensive counseling or pharmaceutical interventions.

There is strong epidemiological evidence that poor diet is associated with depression. The reverse has also been shown, namely that eating a healthy diet rich in fruit, vegetables, fish and lean meat, is associated with reduced risk of depression. To date, only one randomised controlled trial (RCT) has been conducted with elevated depression symptoms being an inclusion criterion, with results showing that a diet intervention can reduce clinical levels of depression. No such RCTs have been performed in young adults. Young adults with elevated levels of depression symptoms and who habitually consume a poor diet were randomly allocated to a brief 3-week diet intervention (Diet Group) or a habitual diet control group (Control Group). The primary and secondary outcome measures assessed at baseline and after the intervention included symptoms of depression (Centre for Epidemiological Studies Depression Scale; CESD-R; and Depression Anxiety and Stress Scale– 21 depression subscale; DASS-21-D), current mood (Profile of Mood States), self-efficacy (New General Self-Efficacy Scale) and memory (Hopkins Verbal Learning Test). Diet compliance was measured via self-report questionnaires and spectrophotometry. One-hundred-and-one individuals were enrolled in the study and randomly assigned to the Diet Group or the Control Group. Upon completion of the study, there was complete data for 38 individuals in each group. There was good compliance with the diet intervention recommendations assessed using self-report and spectrophotometry. The Diet group had significantly lower self-reported depression symptoms than the Control Group on the CESD-R (p = 0.007, Cohen’s d = 0.65) and DASS-21 depression subscale (p = 0.002, Cohen’s d = 0.75) controlling for baseline scores on these scales. Reduced DASS-21 depression subscale scores were maintained on follow up phone call 3 months later (p = .009). These results are the first to show that young adults with elevated depression symptoms can engage in and adhere to a diet intervention, and that this can reduce symptoms of depression. The findings provide justification for future research into the duration of these benefits, the impacts of varying diet composition, and their biological basis.

More like this
Mind and Body
5.17.2022 11:00 AM
First-of-its-kind study reveals transgender children are extremely unlikely to retransition
By Nick Keppler
Mind and Body
5.15.2022 2:30 PM
Best diet to boost mood? A study on men and depression reveals the answer
By Sarah Sloat
Mind and Body
5.7.2022 3:00 PM
Should we abandon good pasta? A dietitian digs in on “healthier” alternatives
By Elana Spivack
Related Tags
Share: