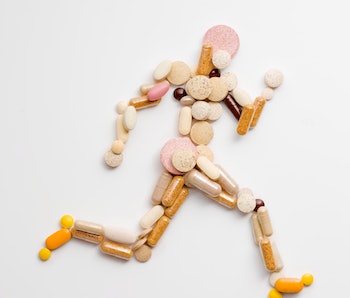 Exercise appears to be one of the most powerful techniques to keep our brains sharp. Unfortunately, we can't go hard forever.

But in the future, that might not be a problem: New research has revealed how to harness the cognitive benefits of a workout -- without the actual workout. Scientists think this help slow aging in the brain.

A study published Thursday in Science suggests the benefits of exercise run in the blood and may be able to be transferred from one swoll organism to another, less-swoll one.

Researchers report that unexercised, aged mice who received blood plasma donations from exercised mice improved their performance on spatial memory tests and showed fewer markers of inflammation related to aging. The authors suggest that these improvements occurred because exercise releases a series of circulating factors (like proteins) into the bloodstream.

Saul Villeda, the study's senior author and an assistant professor of anatomy at The University of California San Francisco, tells Inverse that one specific protein abundant in the liver appears to be especially important. It's called Glpd and it sends a crucial message to the body.

"I think it's sort of signaling to your body: repair yourself or restore yourself," Villeda explains.

The study builds upon the larger idea that aging in the brain isn't inevitable, and that the basic lifestyle tools we have to stave it off can be further honed to keep brains sharp into old age. It's possibly a step towards an exercise pill that's intended to keep the brain swole, not the body — though Villeda cautions that this is far in the future.

Transferring blood plasma – Numerous studies have suggested that exercise can help slow cognitive decline. The mechanisms for that differ, but a working idea is that exercise triggers a series of changes in the body, including the release of certain blood factors that may confer benefits, the study notes.

Villeda calls the blood a "conduit" for all the organs in the body to communicate with one another, which suggests that might help transfer exercise-related benefits from one creature to another.

In the study, a group of aged mice (18 months old) was given access to a running wheel all the time. Another group of sedentary mice was provided with nesting materials (to promote more chilling and less running). Then, blood plasma (which is the white-ish part of blood that contains all the circulating cells and proteins) was taken from each group and injected into two additional groups over three weeks.

The mice with their fresh runner-blood injections then performed a water-based maze test — they had to find a platform to get to safety — and a fear conditioning test.

These tests are designed to test spatial learning memory. If you've ever had a moment when you realize that you can't find your car in the parking lot anymore, you've experienced a lapse in that type of memory, Villeda explains.

"All of a sudden, you might see this older individual using their car alarm to try and find their car because they can't quite remember where their car was," he says. "Those are the types of impairments that already are occurring with just normal age before you get dementia or disease."

The mice who received blood plasma transfusions from the exercised mice were faster to learn the location of the dry platforms in the maze compared to those that got plasma from sedentary mice. In the fear-based test, the mice were quicker to freeze in response to a context clue – suggesting that they were faster to learn what might cause them harm.

In mouse-years, you might think of these aged mice as 70-year-olds, Villeda says. The improvements seen in the mice who received plasma donation were the equivalent of turning back the clock decades, he explains:

"We're reversing it probably back to the late 30s, early 40s. But that's a significant improvement for these animals."

This study suggests that these transfusions may help to preserve memory functions that once existed in younger animals, Villeda says — his team found that they were able to reverse some of the animal's cognitive impairments. What these transfusions can not do is boost memory — the goal is to prevent decline, not add benefits.

An exercise pill future? — It's hard to see research like this and not immediately think of the long-awaited exercise pill. Even Villeda's mom ("I run everything by my mom," he says), couldn't help but jump to the comparison.

"She's like, oh, 'it's exercise in a bottle,'" he says. "I think that we can eventually get there. But this is sort of the beginning of that pursuit."

That pursuit begins by honing in on the circulating factors present in the blood plasma from the exercised animals, in particular Glpd. That enzyme is also seen in elderly humans who exercise, the study showed.

Glpd1 works like a scissor on the cells, cutting away proteins and ultimately sending that restorative message. Villeda suggests that Glpd1 might be driving these improvements in memory because it can reduce inflammation that's related to aging, and in some cases stimulate processes related to wound healing, he says.

Villeda future work hinges on refining that scissor, and turning it into a small molecule that could form the basis of the elusive exercise pill. "So what we're trying to do now is make forms of the protein, smaller forms of the protein that only have that [scissor] part of it," says Villeda.

That said, he emphasizes that this isn't meant to be a replacement for exercise itself. Not all of the benefits linked to exercise can be replaced by injecting blood plasma: Muscle contractions can help regulate the body's internal clock, and that getting out in nature (as one might for a walk or run) can have mental health benefits. A pill can never recreate those things.

But the pill might be able to confer these lasting cognitive benefits to people who may not be able to exercise the way they once could. Even as marathon times decline, the future brain may not have to give up those exercise-induced benefits.

Abstract: Reversing brain aging may be possible through systemic interventions such as exercise. We found that administration of circulating blood factors in plasma from exercised aged mice transferred the effects of exercise on adult neurogenesis and cognition to sedentary aged mice. Plasma concentrations of glycosylphosphatidylinositol (GPI)–specific phospholipase D1 (Gpld1), a GPI-degrading enzyme derived from liver, were found to increase after exercise and to correlate with improved cognitive function in aged mice, and concentrations of Gpld1 in blood were increased in active, healthy elderly humans. Increasing systemic concentrations of Gpld1 in aged mice ameliorated age-related regenerative and cognitive impairments by altering signaling cascades downstream of GPI-anchored substrate cleavage. We thus identify a liver-to-brain axis by which blood factors can transfer the benefits of exercise in old age.