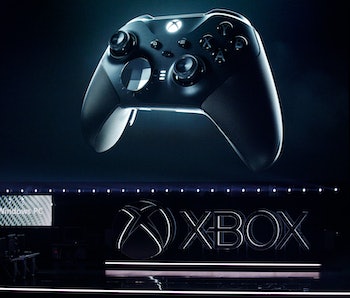 Microsoft showed the world its vision for Xbox Series X back in December 2019 when it unveiled the next-gen console, but new rumors about a reveal event that might happen very soon rekindle theories about a mysterious second next-gen console that'll be more affordable. Is Project Lockhart real?

Windows Central reported Tuesday that a more-affordable but less-powerful Xbox might soon be announced during a digital reveal event in May. "Recently, we heard Lockhart is entering take home stages for Xbox employees to get their hands on the system and begin providing feedback and testing," the article reads. "The timing would indicate to me that rumors of upcoming showcases in early May are likely accurate."

Rumors of this entry-level Xbox have been circulating online for more than a year with various reports claiming that Microsoft has codenamed the gaming system “Lockhart,” but Windows Central believes it will launch as the “Xbox Series S” as early as May 5.

The possible announcement of the Series S might come as a surprise. Xbox chief Phil Spencer tried to quash any chatter about the potential release of a second console back in June 2019, but if multiple Xbox employees have taken a prototype version of the Series X home to begin off-site tests, then the situation feels like how the company tested its xCloud game streaming platform.

Jez Corden, who wrote the Windows Central piece, didn’t name a specific date in his report, but several YouTubers and a Redditor have recently speculated that Microsoft would host a press event in May to make up for E3 2020’s cancellation. The yearly gaming trade show was nixed in light of the global coronavirus pandemic, which has left Microsoft’s announcement schedule wide open.

E3 is always hosted at the Los Angeles Convention Center, which is right next door to the Microsoft Theater where the Xbox team would host an annual unveiling of new hardware and software. Since that won’t be happening this year, Microsoft has the freedom to reveal whatever it was planning for E3 2020 whenever the company wants.

All signs point to a Series S reveal, which might be exciting for gamers on a budget but not anyone else.

The Inverse Analysis — Microsoft has already revealed everything about the Xbox Series X beside the price tag, so an event to showcase the more affordable Series S while also announcing the price for the Series X makes sense, at least on paper. If Microsoft does launch two consoles later this year, they should each come at a significantly different price point with differing features.

The Series X’s specs make it seem like a powerhouse in terms of graphics and processor speeds, but the Series S might be the polar opposite. Windows Central previously reported that the Series S would come with “4-teraflops” of processing power. To put that in perspective, the current-gen Xbox One X has a 6TF GPU. In other words, the processor on the Series S would be 50 percent weaker than the best Xbox console you can buy right now.

That probably means it’ll be even cheaper than the $400 One X, but it won’t come close to delivering a next-gen console experience compared to the Series X that will come with 12TF. The Series S might be fit for gamers looking for an affordable upgrade from the Xbox One S, but anyone that wants the eye-boggling, PC-grade features that Microsoft has been talking up will have to spend the extra money on the Xbox Series X.