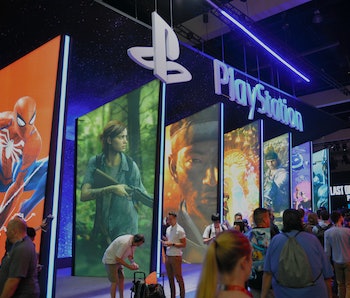 Following early reports from gaming industry insiders, E3 2020 has been officially canceled by the Entertainment Software Association (ESA) due to increasing concerns about the spread of COVID-19, commonly referred to as the coronavirus. While this seems like the safest choice as the virus spreads, the decision will have drastic effects on the entire gaming industry for the rest of 2020, especially with next-gen consoles on the horizon. Was 2019 the last E3 ever?

"After careful consultation with our member companies regarding the health and safety of everyone in our industry — our fans, our employees, our exhibitors and our longtime E3 partners — we have made the difficult decision to cancel E3 2020, scheduled for June 9-11 in Los Angeles," the ESA said in an official statement. "Following increased and overwhelming concerns about the COVID-19 virus, we felt this was the best way to proceed during such an unprecedented global situation. We are very disappointed that we are unable to hold this event for our fans and supporters. But we know it’s the right decision based on the information we have today."

Rumors about E3's cancellation had been swirling ever since GDC was canceled in late February. At the time, the ESA was adamant that E3 was still happening, telling Game Informer "we are moving ahead full speed with E3 2020 planning." Unfortunately for the ESA, major partners like Geoff Keighley and iam8bit pulled out, and with coronavirus cases on the rise in the US, an event of such a scale presents a huge infection risk.

Many sources suggested that an official announcement was imminent following a tweet from indie publisher Devolver Digital (featured above). Tuesday night, Ars Technica and Kotaku's Jason Schreier reported that a cancellation announcement would happen sometime Wednesday, March 11. Bloomberg then reported that the ESA would announce the cancellation officially at 12:30 p.m. Eastern, though the statement wound up happening about an hour earlier than predicted.

Even though this is the safest option for everyone involved because of coronavirus's rising impact on the US, the ramifications of this decision will be felt within the industry throughout the rest of 2020 — and maybe the decade.

To start, the ESA will lose a lot of money with this decision, as E3 is a major moneymaker for the company every year. Even though E3 has lost a bit of its luster in recent years, many major video game announcements happen at the show itself or during the week it takes place. This was set to be a major year for the show too as many games for the PS5 and Xbox Series X were poised to be shown off in full for the first time ever. Microsoft undoubtedly had plans to show off its next-gen console.

The cancellation of E3 will set all these announcements back and cause developers to adopt a new announcement format that resembles digital Nintendo Direct or State of Play presentations that are cheaper to execute while also avoiding the risk of infection. Development pipelines focused on creating E3 demos this spring will also be impacted. We still don't know about a lot of the games that are coming out this fall, and the likes of Microsoft, Warner Bros. Interactive Entertainment, Ubisoft, and Bethesda will have to find new ways to show games off.

Does that mean private events exclusive to journalists? Livestream presentations?

The immediate impact of E3's cancellation might feel a bit frantic as developers and video game publishers struggle to figure out how to promote their games instead, but this decision will also have long-term ramifications for how the industry functions. The show was already on a downward trend with the likes of Sony and EA pulling out, and now that companies will be forced to promote their games without E3, they might all realize that there are more modern and cost-effective ways to promote a game than going to a massive convention.

It's always possible that E3 2020 will be rescheduled for later in the year but just as likely there won't be one until E3 2021. Either way, many companies may abandon the show altogether despite the good intentions of this cancellation.