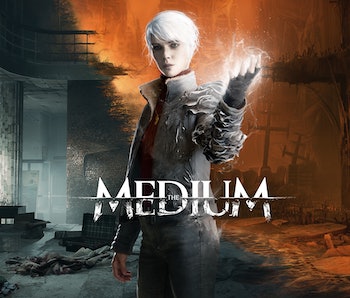 While it's coming out over two months after Xbox Series X and S are released, The Medium will be one of the first Xbox console exclusives to truly show the power of the new hardware. If this atmospheric thriller has caught your eye, we've rounded up details on The Medium's release date, developer, gameplay, story, and more. Here's everything we know about Bloober Team's upcoming Xbox Series X scare-fest.

When is The Medium's release date?

After some delays, The Medium will finally be released on January 28, 2021. While it was originally framed as an Xbox Series X launch title by Microsoft, the first release date shared by Bloober Team was December 10, 2020. Bloober Team decided to delay the game once Cyberpunk 2077 was slated to release on the same day. Now, it will be released on January 28, 2021 on Xbox Game Pass. So any gamers with a paid subscription will be able to play The Medium for free.

"I hope we'll be able to deliver, but at this time everything is unexpected," Bloober Team founder Piotr Babieno told GamesIndustry.biz in September 2020. "We'll know for sure whether or not it will make that November 10 launch as we get closer to that date." Even though The Medium did not make the launch of Xbox Series X, Observer: System Redux, a remaster from the same developer, was available for both Xbox Series X and PS5 on day one.

Unless Sony confirms or denies those persistent Silent Hill PS5 rumors, The Medium remains the most exciting next-generation horror game before Resident Evil 8 comes out next year.

Is there a trailer for The Medium?

Ahead of the game's launch, a scary live-action trailer was released for The Medium. It follows Marianne as she is pursued by The Maw and meets a girl named Sadness in both the real world and spirit world. It sets the tone for the game very well, and you can watch it below:

Is there a gameplay video for The Medium?

The Medium received a 14-minute long gameplay video just a couple of weeks ahead of its launch. In it, we see the dual reality mechanic in play. At the start of the demo, Marianne explores a hotel in the regular world, but she is eventually placed in both worlds after interacting with a ball.

Is The Medium an Xbox exclusive game?

Like Stalker 2, The Medium will release for PC and Xbox Series X|S. Unlike most Series X launch titles, a current-generation Xbox One release for The Medium is not planned.

"We spent a lot of years thinking about this game and how can fulfill our dream about it, but we had a problem with the platform," Producer Jacek Zieba explained during an interview with Microsoft in May 2020.

"Then Xbox Series X came up and we thought 'Yeah, this is the perfect match for us' and a lot of doors were open for use to be creative and do the game as we wanted." Basically, keeping the two worlds of The Medium running simultaneously with a stable frame rate and minimal loading would be extremely difficult, if not outright impossible, on current-gen hardware.

This comment also probably rules out versions of The Medium for systems like PS4 and Nintendo Switch, which wouldn't even be able to run it. As for PS5 and Google Stadia versions, they don't appear to be in the cards for the developer right now, but might be possible in the future.

The game is also coming to PC through Steam, Epic Games Store, and the Microsoft Store. It's a fairly demanding game though, so we'd recommend checking the minimum required specs on the game's Steam page before you purchase it. The Medium costs $49.99, and pre-ordering it on PC will net players the game's soundtrack.

If the gameplay trailer above isn't enough for you, a four-minute uncut gameplay video for The Medium was released on July 24, a day after a gameplay trailer appeared during the Xbox Games Showcase. The video also shows the dual-reality" concept that is at the core of The Medium, highlighting how it's used to solve puzzles. This dual worlds gimmick is really something that can only really be done on next-generation consoles, so it's definitely worth checking out to see the power of the Xbox Series X.

As you can see in the video, much of The Medium is spent exploring and solving puzzles in a style similar to Silent Hill or Resident Evil. Still, the dual reality gimmick should set up some mind-bending scenarios that players will have to work their way through. In the video, we see Marianne mess with a clock in the real world to speed up time within the Spirit World, opening a path that allows Marianne to finish a puzzle and progress.

In the spirit world, Marianne can use some special abilities like the Spirit Blast and Spirit Shield. According to a press release from the developer, a "third of the action taking place in the real world, a third solely in the spirit world and a third in both realms simultaneously".

In a more recent video called "What Does a Medium Do?" Bloober Team explained what abilities Marianne has during exploration and their use. Her heightened sense as a Medium allow her to sense things other people wouldn't see in the real world. This gives her a vision that lets her see hidden objects.

She can also scan objects and relive the Echoes of their history in her head, much like Cal Kestis could in Star Wars Jedi: Fallen Order. She can also view specific moments from the past if she finds soul fragments while exploring the Spirit World. Ultimately, her goal is to bring peace to all of the lost souls she encounters while in the spirit world.

What is The Medium's story?

While The Medium's trailers are fairly confusing in typical horror-game fashion, the officially released premise does give some insight into what's going on.

"Players will find themselves in the body of Marianne, a medium hounded by visions, living and interacting across two worlds: the real, and the spirit world," it explains. "Nothing is what it seems, everything has another side. As a medium with access to both worlds, you have a wider perspective and can see more clearly that there’s no one simple truth to what others perceive."

Bloober Team's CEO Piotr Babieno delved into the themes a bit more in a press release, saying that The Medium is about how "when you change your point of view, you discover that things are more complicated and nuanced than you initially thought." Ultimately, The Medium appears to be telling a story about perspective in a very literal and horrific way.

Most of the game seems to take place at the Niwa Hotel, and there are two characters that Marianne will keep running into over the course of her adventure. First, there's Sadness, a little girl that's stuck at the Niwa Hotel and sports a creepy mask. Marianne will also have to deal with The Maw, the evil entity that seems to be the source of Marianne's hellish experience. The Maw is voiced by Troy Baker, who recently played Bruce Banner in Marvel's Avengers.

Is the composer of Silent Hill working on The Medium?

Silent Hill's influence on The Medium is noticeable from the gameplay all the way to the soundtrack. The musical similarity is intentional though, and Silent Hill composer Akira Yamaoka is officially attached to the project. "The inclusion of the legendary Akira Yamaoka — best known for his work on the Silent Hill franchise — is a dream come true," composer Arkadiusz Reikowski explained in a press release. "We’ve been inspired by many of the previous games he has worked on and are thrilled to bring a new one to life with The Medium."

Who is developing The Medium?

The developer of The Medium is Bloober Team, a Polish studio that has made a name for itself within the horror genre. Bloober Team's flagship franchise is Layers of Fear, though you may also know the team for its cyberpunk horror game Observer or its 2019 game adaption of Blair Witch, which was also an Xbox exclusive at launch.

Speaking to GamesIndustry.biz, Piotr Babieno explained that "from the first day we talked about [making] horror games, we said we wanted to be the Blumhouse of the games industry." They've mostly lived up to that name, producing five solid horror games including Layers of Fear and Observer since 2016. Going forward, Babieno thinks the team will solely focus on horror games like how Blumhous focuses on horror movies.

The Medium is a brand new franchise for the team, so it will be exciting to see what other innovative things Bloober Team does with it. The dual reality gameplay already seems incredibly ambitious.

This article was originally published on July 29, 2020