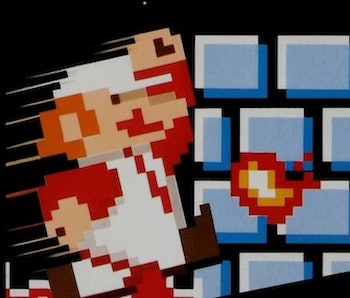 September 11 marks the 35th anniversary for the Super Mario Bros. video game series, and Nintendo is spending the next six months celebrating it in big ways. We're getting the Super Mario 3D All-Stars collection, an AR Mario Kart, and more. But the weirdest and most surprising game of all is Super Mario Bros. 35, a Mario-themed battle royale based on the classic NES game.

Between the sensation that is Fall Guys: Ultimate Knockout, Tetris 99's more modest success, and now Super Mario Bros. 35, it's clear that the battle royale genre shouldn't be limited to just shooters anymore. And it seems like Mario might be the last one standing.

The game is very much inspired by Tetris 99, a battle royale puzzle game released by Nintendo in February 2019. As its title suggests, this game tasks 35 players with going through the original Super Mario Bros. at the same time. When players defeat an enemy, they can send it to their opponent's screen.

Super Maro Bros. 35 also features an item roulette that players can occasionally use to get a boost and to target others. Whether you want revenge on someone who attacked you previously or to take down the leader is up to you. The trailer also teases that players can level up and earn coins the more they play, though we don't know what players will earn by doing these things. Maybe there'll be some kind of battle pass you can spend the coins in to unlock cosmetics.

As a platformer and battle royale hybrid, Super Mario Bros. 35 definitely resonates with Fall Guys: Ultimate Knockout, another battle royale game that has found great success. Are we seeing the rise of the next great battle royale niche?

Still, for Super Mario Bros. 35 to emerge right around the peak of Fall Guys definitely makes it seem like there's a demand for more novel ways to explore the niche realm of battle royale platformers.

The battle royale genre is often associated with shooters like Fortnite and Call of Duty: Warzone, but the core "last man standing" premise transcends genres. The mix of luck and skill in any survival-based experience makes for engaging gameplay, and that can be applied to the puzzle and platforming genres, which is why we've seen titles like Tetris 99, Fall Guys, and Super Mario Bros. 35 emerge.

For those that aren't into shooters and can get annoyed at the intensity of games like PUBG, changing up the pace by putting this formula in a different genre can make it much more appealing. You could also make the argument that more casual party games like Fall Guys and classic platformers like Super Mario Bros. 35 can potentially have an even wider appeal.

As games like Fortnite continue to grow, and new battle royale shooters saturate the marketplace, the battle royale genre might have to evolve and adapt to different genres and settings. If Super Mario Bros. 35 can even match a fraction of Fall Guys' popularity, then the trend of non-shooter battle royales can only stand to improve and evolve even further.

Super Mario Bros. 35 will be released for Nintendo Switch on October 1, 2020.