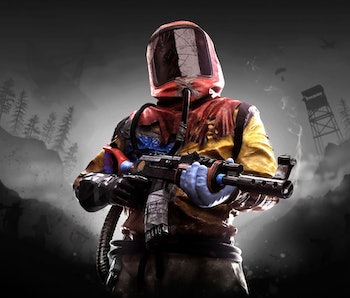 Rust is finally coming to consoles following a sudden surge in popularity.

This survival game launched on Steam in Early Access all the way back in 2013. At the time, it was extremely popular with some of the biggest gaming YouTubers. While its popularity waned over time, the game experienced an Among Us-like second wind thanks to some high-profile Twitch streamers in January 2021.

While Valheim stole a bit of its thunder by early March, Rust remains very popular. Now, it’s coming to consoles very soon with ports that should generate more interest in the game again.

When is the Rust Console Edition's release date?

Rust for PS4 and Xbox will be released on May 21, 2021. This date was confirmed during an ID@Xbox Twitch Gaming Showcase on March 26 after a spring release window was teased earlier in the year. This release will come about a year and a half after the port’s announcement.

The console ports were confirmed during Microsoft's X019 event and were slated for a 2020 release. The whole year went by though, and we didn't hear anything else about these ports.

Then in December 2020, developers Facepunch Studios and Double Eleven released a blog post confirming the delay: "We love making great games and bringing them to new audiences, but that sometimes means taking a bit longer to get it right than we originally planned and comes at the unfortunate cost of the disappointment and trust of those who were so keen to play it upon launch," the blog post said.

The game was rated by the ESRB in January, and a closed beta for the console ports was subsequently held. Clearly, this was all building toward a May release.

Is there a Rust Console Edition trailer?

Yes, there is! A trailer for Rust console ports was released upon the announcement of a Spring release window. The trailer starts with some atmospheric shots of the game's world before transitioning into showcasing combat. Before that, we just had the announcement trailer from XO19.

If you want to get an updated look at the game’s console port, you can check out a trailer below.

Is Rust coming to PS5 and Xbox Series X?

At this time, Rust is only confirmed for PS4 and Xbox One. These systems were reaffirmed as the only two ports upon the announcement of a Spring release window. The console ports were announced before PS5 and Xbox Series X were fully unveiled, so it makes sense that Facepunch and Double Eleven didn't consider them initially.

Now that the game is releasing in 2021 though, a next-gen release is highly desirable. Double Eleven seems to be sticking by just doing PS4 and Xbox One versions of the game, so players will need to rely on backward compatibility to play it.

Rust is a hardcore survival game that has entertained PC players since 2013. The game finally exited early access in 2018. Players are dropped into a large world and must survive in the wilderness while managing their health, hunger, and thirst. There is a deep crafting system as well that encourages players to build the tools and weapons they need in order to survive.

Players can eventually build a base for themselves, but other players are always a threat because Rust is a multiplayer game. The smartest choice for players is to join a clan or at least play with a group of friends that can help you survive. It's a tried and true formula that we've seen work for many survival games. So why has Rust, in particular, gotten so popular recently?

As IGN explained, it's mainly because popular streamers like XQc, Shroud, and Pokimane have all been playing the game on a private server and fighting each other in entertaining streams. Just like how Among Us gained a second life through streamer, Rust is starting to gain more players and become more popular because it is getting so much attention on Twitch, even if normal players can't join their private server.

Rust Producer Alistair McFarlane highlighted the extent of its success on Twitter, revealing that 79 million hours of Rust have been watched and gotten over 513 million views since the start of 2021 alone. A look at Steam Charts shows that more people are playing Rust than ever. As such, 2021 is a great time for Rust's console launch.

Will Rust get a physical release?

Yes, it will! Facepunch and Double Eleven are partnering with Koch Media to release Rust physically at GameStop and Amazon. It will cost $49.99 and includes the Future Weapons and Tools Pack as a pre-order bonus. Digitally, players can pay full price at $59.99 to get the Deluxe Edition.

Rust will be released on PS4 and Xbox One this Spring.