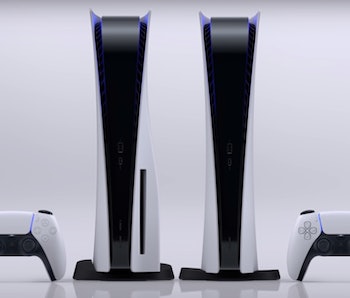 Since Sony gave gamers their first look at the PS5 back in June, we've all been dying to know — when the heck can I buy one?! Sony's stuck with its "holiday 2020" messaging for PlayStation 5 throughout the summer months, with industry observers expecting the new console to come out sometime before Black Friday, the year's biggest shopping day. Now we finally have a day, and it's November 12. The PlayStation Standard Edition will cost $499, and the Digital Edition will cost $399.

Back on September 9, Sony's rival Microsoft revealed its new Xbox consoles would hit the market on November 10. Microsoft came out swinging on price, pricing the cheaper Xbox Series S model at $299. That surprisingly low price point, coupled with financing options around the same monthly cost as a new mobile phone, put added pressure on Sony to come close to a more consumer-friendly price tag.

Prior to Microsoft's Series S and X price reveal, games industry observers had long expected the PS5 would come in at or above the $500 mark. A Bloomberg report from back in February claimed the manufacturing cost of the PS5 was around $450 per unit. It's not clear if that estimate included the price of the spiffy new DualSense controller, which is likely considerable given all of its innovative haptic feedback features.

Sony has reason to be skittish about pricing its consoles out of reach of consumers. With PS4's robust library of cutting-edge titles and 100-million strong install base, many cash-strapped gamers could be inclined to catch up on their backlogs before going all-in on a brand-new piece of hardware. The company's marketing for PS5 thus far has emphasized a strong stable of first-party IP – including Horizon Forbidden West and Spider-Man: Miles Morales. Sony's positioning itself as an Apple-like maker of premium products, while Microsoft adopts an approach akin to Netflix by foregrounding the considerable variety and value of its Xbox Game Pass Ultimate offerings.

What's more, Sony doesn't have a stellar track record when it comes to pricing its consoles high. When the PS3 debuted in 2006, it retailed at $499, substantially more than the Xbox 360, which also launched that year. The PS3’s price tag led to a lag in initial sales that even Jack Tretton, former console chief for the company, admitted were due to “missteps” regarding how the hardware was priced.