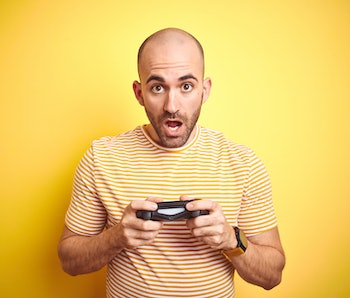 The PlayStation 5 remains under wraps even almost a year after Sony first announced the next-generation console, but a sketchy new leak claims the console will have a surprising shape when it launches later this year that's unlike any console that's come before.

Leaked images of the PS5's developer kits have previously suggested the company might opt for a wonky, V-shaped design, but a less-than-legit “leak” posted online Tuesday claims the PS5 will be spherical...SPHERICAL!

Input: Sony is struggling to make the PlayStation 5 for less than $450

The bogus design first surfaced on Reddit and featured an edited PlayStation manual that featured three sketches of a round PS5 that looks like a Death Star sitting on a thin pedestal. While nobody knows exactly what the final design of Sony’s next-gen console will look like, there’s absolutely no evidence to suggest that the company would consider such a drastic change in the aesthetic.

PlayStations have been rectangular since the launch of the original in 1994, and it’s very likely Sony will stick to the time-tested design strategy this time around as well. Even though South Park’s Okama Game Sphere from the 2001 episode might have looked like the console of the future and Nintendo has already released a Gamecube, this ain’t it, chief.

It’s still possible that Sony will unveil a funky design for its upcoming console, but there's no way the change would be something this drastic.

Microsoft’s Xbox Series X was revealed to have a tall, PC-tower-like design unlike any other Xbox before it. That means it’ll take up less space and will sit comfortably next to books on a shelf. Seeing as the Xbox Series X is the PS5’s biggest competitor, Sony could try to one-up its design with something equally as particular or even go for something more futuristic-looking.

All of the PS5 dev kits we’ve seen suggest that Sony is sticking with its traditional low rectangular design, but the top could have a V-design for the Roman numeral five. However, it’s important to note that dev kits never feature consoles’ final design, so even if that was an original design, it probably has changed significantly over time.

The PS4 dev kit was massive compared to the final product. Companies like Sony and Microsoft build this test hardware with maximum performance in mind, so they’re usually larger and have more vents to keep the internal components as cool as possible. While the PS5 dev kits might look like the hood of a sports car right now, the market version will probably end up being more compact and have way fewer vents to avoid anything falling in. We’ll need to wait and see what the final product might look like — but it almost certainly won't be spherical.

Rumors about when Sony might reveal the PS5 have been swirling around online for months now. A Pastebin in February claimed Sony would announce the date, time, and location for the PS5 reveal event by the end of the month, but that time has come and gone. The company hasn’t said a word about its console since the handful of features it teased in October 2019, but with a Holiday 2020 release date window, an unveiling event is imminent that'll show off what the final designs will look like.

Just don’t expect it to look like a Death Star.