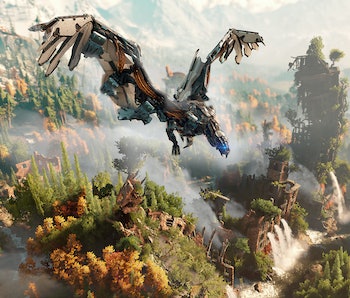 Guerrilla Games leaked a major hint about Horizon Zero Dawn 2 on Tuesday and then quickly deleted it.

The Dutch developer tweeted out a link to a job listing for a “Senior AI Programmer” position. The accompanying image revealed not only that the game was in development, but that it's seemingly being made exclusively for the PS5 and not the current-gen PS4.

Guerrilla Games leaked is owned by Sony Interactive Entertainment, so there wasn’t any question about whether or not Horizon Zero Dawn 2 would be a PlayStation exclusive. But the now-deleted tweet contained a #PS5 hashtag, which suggests the game is being developed exclusively as a next-gen title. It won’t be launched on the PS4 and then remastered for Sony’s next-generation console like The Last of Us: Part II. The real question is whether or not the game will be ready in time to launch with the PS5 later this year. The answer is almost certainly a no, but this news does mean that Horizon Zero Dawn 2 is one of the few next-gen games confirmed for the console.

Guerrilla reposted the job link after the hashtag snafu, but Redditor u/Justlava quickly snagged a screenshot of the original tweet. The developer has not officially confirmed that HZD2 is happening, but previously advertised job openings and comments from the IPs executive producer Angie Smets have essentially proven that a sequel is imminent. Tuesday’s Twitter slip-up provided the first concrete piece of evidence HZD2 was in the works.

As far as Sony has indicated, the PS5’s “Holiday 2020” release will not be delayed because of the global coronavirus pandemic that has led to the delay of many AAA titles. Based on the PS4’s November 15, 2013 North American launch date and the PS3’s November 17, 2006 release, gamers should expect the console to hit shelves in mid- to late-November.

If HZD2 is a PS5 launch title, then gamers shouldn’t expect it to drop any sooner than the console’s release date. A release around the same time the PS5's release, however, seems too optimistic.

The Inverse Analysis — Horizon Zero Dawn took Guerrilla about seven years to develop, and it was announced two years before its February 2017 launch. Production for the game began in 2011 and ramped up after the 2013 release of Killzone: Shadow Fall. This sequel might not take that long, but a release this year doesn't seem likely unless Guerrilla and Sony are planning on making a surprise announcement soon.

The original title required Guerrilla to build a brand-new game engine from scratch, which is an extremely labor-intensive process. Now that the IP has an established engine and a storyline the developer can continue from, HZD2 might take substantially less time to create.

The developer will likely have to optimize its engine for the 2020 release of the PS5, but assuming that production could have begun in 2018, we might see a 2022 release date for Horizon Zero Dawn 2. There's also the possibility that Guerrilla might be cooking up a separate PS5 launch title first: Killzone 5.

While the most recent installment of the first-person shooter, Killzone Shadow Fall, didn’t make as many waves as HZD, it might be what launches with the PS5. Guerrilla has released a new Killzone title at the launch of every Sony console since the PS2, plus the company hired two developers that have years of experience with FPS games.

HZD2 is definitely coming, but it might take a backseat to Killzone if Sony and Guerrilla stick to tradition.