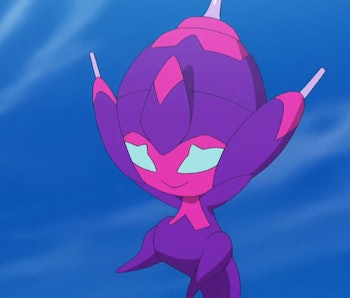 Every Legendary Pokémon and Ultra Beast has returned in The Crown Tundra. One of those Ultra Beasts is Poipole, the Poison-type pre-evolution to the powerful Naganadel.

While other Legendaries and Ultra Beasts can be caught in the wild or through Dynamax Adventures, getting Poipole is not as straightforward. So here's how to get Poipole on your team in Pokémon Sword and Shield.

Similar to but different from a Legendary Pokémon, Poipole is actually an Ultra Beast, a new and otherworldly kind of Pokémon introduced in the 3DS Sun and Moon games. Poipole itself wasn't introduced until Pokémon Ultra Sun and Ultra Moon in 2018.

Poipole evolves into the powerful Poison- and Dragon-type Naganadel, which has a base stat total of 540 with staggeringly high Special Attack and Speed. Poipole can be evolved by leveling up while knowing the move Dragon Pulse. This is pretty easy to do with as you can remember the moves of Pokémon in any Pokémon Center, but you'll need to have a Poipole first in order to obtain Naganadel.

These are the steps you'll need to take in order to get one:

You won't get access to Poipole right away in The Crown Tundra. In order to get, or any other Ultra Beasts, players will have to complete the main story and all of the other Legendary Clues in the expansion.

Once you've done all of that, you can then get a fourth Legendary Clue from Peony in the Max Lair. After starting this, Ultra Beasts will be available as part of Dynamax Adventures, and you're one step closer to getting a Poipole.

You also don't fight Poipole at the end of a Dynamax Adventure like other Ultra Beasts. Instead, you will have to complete 15 Dynamax Adventures in the Max Lair. These dungeon-crawling experience string together a series of Max Raid battles and typically cap off with a fight against a Legendary or Ultra Beast at the end.

Step 3: Talk to Poipole in the Max Lair

Unlike most Legendary Pokémon in The Crown Tundra, you don't actually have to capture Poipole during a battle. Instead, Poipole should show up in the Max Lair after you complete 15 Dynamax Adventures. Go and talk to the Pokémon, and the scientist who runs the Max Lair will tell you that she's having trouble both researching the Max Lair and taking care of Poipole.

She'll then ask the player if they want to take care of it. Say "Yes," and Poipole will join you. It will only be level 20 with the moves Helping Hand, Acid, Fury Attack, and Fell Stinger. Its ability, Beast Boost, will increase Poipole's highest stat every time it knocks out a Pokémon.

From here, go to any Pokémon Center in the game and make Poipole remember the move, Dragon Pulse. Level it up just once, and you'll have a Naganadel on your team, capping off your adventures in Pokémon Sword and Shields' expansions.

Pokémon Sword and Shield and its expansions are available now on Nintendo Switch.