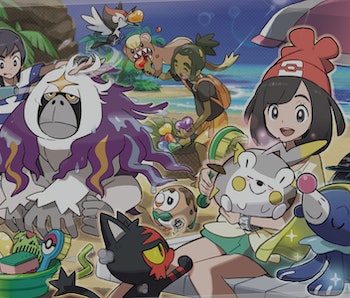 Pokémon Sun and Moon leaves you to your own devices once you become Champion, but there’s still quite a bit to do once the credits roll. You can catch some of the game’s rarest, toughest monsters post-game, and there’s plenty of more intensive competition to be had should you dare seek it out. In a lot of ways, the end of the game isn’t really the end at all.

The first thing many set out to do once they’ve left their mark on the Hall of Fame is finish up their Pokédex. Pokémon Sun and Moon make things a little more manageable with separate Pokédexes for each island in Alola that display the percentage of Pokémon you’ve caught so far. It’s a simple way to keep you motivated.

However, you shouldnt forget about the QR Scanner which gives you the chance to unlock starter Pokémon from previous generations, among other rare beasties. Be on the lookout for QR codes when you’re out and about (don’t forget your 3DS!) and make sure you’re getting your daily ten scans in.

There are a few legendary Pokémon to pursue apart from Lunala and Solgaleo, which you catch during the game’s main campaign. To start, you can also catch their unevolved form, Cosmog, by traveling to the Altar of Sunne or Moone. Meanwhile, you can also add the ominous crystalline Pokémon, Necrozma, to your team if you seek it out on Ten Carat Hill. Be careful though, it’ll engage you at level 75 and this Psychic Pokémon isn’t fooling around.

Hunt for the Ultra Beasts

Once you return from your adventures with the Elite Four, you can pursue a brand new quest to track down the elusive Ultra Beasts. Back on Akala Island, visit the deserted motel on Route 8 and meet up with Anabel and Looker, who’ll set you on the path to finding these elusive creatures.

Once you’re Champion, you can enter the Battle Tree where you’ll find even fiercer competition. You’ll face off against some of the toughest opponents in the series. Victory nets you Battle Points which you can exchange for some pretty nice items, including Mega Stones, to aid you in a fight.

You can access the Battle Tree by travelling through the Poni Gauntlet on Poni Island. The Gauntlet lives up to its name, accosting you with a series of tough trainer battles before you enter the Tree itself. Make sure your team is in tip-top shape before you attempt this.

Ah, competitive Pokémon — the end game for the truly devoted, or just people who really get into micromanagement. If you really want to stretch out your time with Pokémon Sun and Moon, you might want to start raising a competitive team. The Pokémon with which you took out the Elite Four might not cut it here. You’re going to have to plan your team, strategize each Pokémon’s moveset, breed them for exclusive moves and natures, and raise EVs and IVs. The season hasn’t started yet, so now’s the perfect time to get a move on before local competitions get underway.

While Sun and Moon’s end game doesn’t give you access to a brand new region or anything of that nature, there’s still a whole lot to explore within Alola itself before you can become a true Pokémon master.