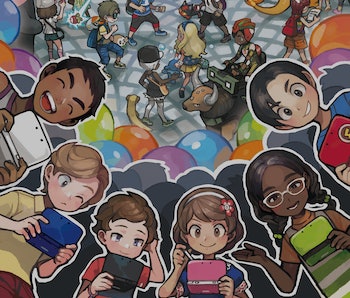 The seventh generation of Pokémon, Pokémon Sun and Moon, brings with it a host of changes. There are new pocket monsters per usual, but there’s also new forms of old ones. Even the very structure of what it means to play a Pokémon game has significantly shifted away from the classic “battle all these gym leaders to advance to the final set of battles.” With the new games having only just launched, there has never been a better time to get into Pokémon.

If you’re not already a fan of the worldwide phenomenon, every iteration of game very well might feel like just another layer of complexity on top of something with which you’re unfamiliar. I don’t blame you if that’s the case — there’s over 700 of the critters. And that’s just a base number for the main series that doesn’t fully represent the many spin-offs and tangents in which the franchise extends.

Here’s the thing that isn’t immediately apparent for someone not steeped in the franchise’s history: The release of Pokémon Sun and Moon marks the first time the main series of games has done something wildly unusual. It’s within the realm of possibility that this will establish an entirely new normal. Though what exactly that might be remains to be seen.

It’s possible the future generations of the main series will continue to vary wildly, but given the franchise’s historical precedent, it’s more likely that Sun and Moon will serve as a mold of sorts from which the next games will be cast. Even if the Alola region, inspired by Hawaii, is significantly different from whatever comes next, that’s still a shift in what actually constitutes a Pokémon game.

And that’s just the main series of games. 2016 also happens to be the 20th anniversary of the release of the original Pokémon Red and Blue, and the Pokémon Company International has been celebrating with a bevy of events, promotional giveaways, and more. The first animated movie got a deluxe re-release, tons of special merchandise was put out, and the company even teamed with Niantic to release Pokémon Go, an augmented-reality game in the vein of Niantic’s Ingress but skimmed over with Pokémon flavor.

Though I previously stated that it’s the best time to get into Pokémon, it also happens to be the best time to return. Maybe it’s just the best time for the franchise in general? One might argue that 1996 was pretty important. Regardless, if my job weren’t what it was, I’d likely have stopped playing the games — and paying attention to the franchise — somewhere around the release of Pokémon Emerald back in 2005. I’m almost certainly not alone, and many likely skewed in the opposite direction of my own path.

But Sun, Moon, GO, and literally everything else about this year of Pokémon (maybe the only good thing to happen in 2016, and there’s still a month to go) make a return hard to pass up for anyone that grew up with Charmander, Squirtle, and Bulbasaur. It’s a perfect blend of nostalgia with just enough new bits to make the experience of picking up the new games and playing for the first time both intimately familiar and fresh. It’s a tough combination to beat, and it’s hard to imagine another brand or concept with the same kind of power for my generation. In short, welcome to Alola.