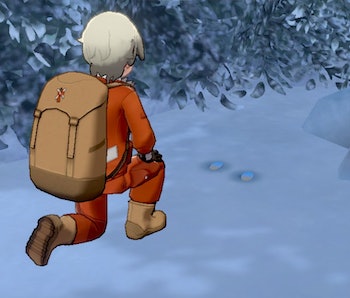 One of the biggest draws with The Crown Tundra — the second DLC for Pokémon Sword and Shield — is that it includes every major legendary Pokémon from the series. In many cases, these monsters are coming to the current generation of games for the first time.

While Peony's main quest in the DLC will have players tracking down Calyrex and other Legendaries at the end of Dynamax Adventures, three Legendary Pokémon are tied to a side quest with Pokémon Professor Sonia.

She asks players to find the Iron Will, Grassland, and Cavern Pokémon by tracing their footprints. Except this process can be quite daunting and confusing. As such, we're rounding up what you need to know about this quest so you don't let Sonia down.

How to start looking for the Iron Will, Grassland, and Cavern Pokémon

Your quest to find these three Legendary Pokémon begins midway The Crown Tundra. In order to start this scavenger hunt reminiscent of The Isle of Armor's Digglet hunting, you'll need to meet Sonia on the outskirts of Freezington. To get to this town, you will first need to go to the Crown Tundra and start your expedition with Peony.

As soon as you arrive at this new area, you will be forced into a battle with Peony. After that, you'll go looking for his daughter by doing a Dynamax Adventure. After completing all of this, which took Inverse about a half-hour, you will meet up with Peony in Freezington. He will ask the player to join him on an expedition to find several Legendary Pokémon.

Once players exit the house and start walking toward Frostpoint Field, they will see the footsteps of the Iron Will Pokemon. While investigating this, players run into Sonia, who asks for their help in tracking down the Iron Will, Grassland, and Cavern Pokémon by finding all of their footsteps around the Crown Tundra. Once this conversation is complete, you are free to explore and find all of the footsteps required for this quest.

Who are the Iron Will, Grassland, and Cavern Pokémon?

Oddly, Sonia does not refer to these three Legendary Pokémon by their actual names.

The Iron WIll, Grassland, and Cavern Pokémon are Cobalion, Virizion, and Terrakion, respectively. They are part of the "Swords of Justice" set of Legendaries from Pokémon Black and White for the Nintendo DS.

Tips to find their footsteps

In total, there are 150 footsteps for players to find in The Crown Tundra. Cobalion, Terrakion, Virizion have 50 footsteps each, though you won't know whose footsteps they are until you interact with them. For each pair of footsteps that you find, you will get 2 percent closer to being able to track that Legendary down.

These footsteps can be located in areas like Frostpoint Field, Giant's Bed, Old Cemetary, and Ballimere Lake. You are only guaranteed to find the first pair of footprints, so the other 149 pairs are on you. They can typically be found around trees or other objects of interest, though there are some exceptions.

As you work your way through the expansion, make sure to scour the environment and interact with any of the footsteps that you find. If you want to take care of this entire sidequest at once, it is also okay to wait until you have completed the rest of The Crown Tundra's story to track these all down for yourself.

From here, you can add them to your party. If you set up camp with Cobalion, Terrakion, and Virizion in your party on an island at Ballimere Lake, the fourth Swords of Justice Pokémon, Keldeo, will spawn and you can catch it.

Pokémon Sword and Shield and both of its expansions are available now.