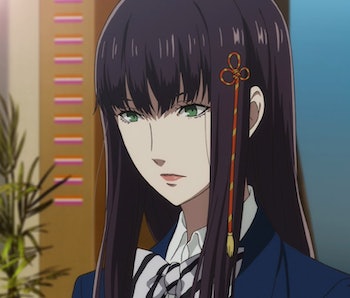 Let’s be honest, Persona 5 Royal is about dating. Sure, there are complex palaces, tests, and numerous side activities, but the best part is building relationships. Confidants are supporting characters that you can spend time with and get closer to, some of which even allow some smooching! Out of all the potential romances, the standout is the one with Hifumi Togo. While there are some requirements to even start getting to know her, Hifumi’s story is well worth the work.

Hifumi Togo isn’t the easiest woman to meet. The protagonist only learns about Hifumi upon reaching the second rank of the Emperor confidant with Yusuke Kitagawa. They then must unlock the Kanda region by watching a television report on June 25th at the earliest. Last, but not least you need to have reached rank 3 in Charm.

Upon satisfying all of these requirements the protagonist can venture into the Church of Kanda and meet the Star confidant.

Hifumi is a reserved and seemingly cold Shogi player who spends most of her time outside of school practicing in church or doing TV interviews. She is a strategic mastermind in the sport, having never lost a match. Most people envy her and spread rumors, earning her the reputation as the “too beautiful shogi player” but also mired under accusations of rigging matches.

She is in a similar situation to the protagonist, really. Both are judged by those around them on rumors that follow them whether they like it or not. But between Hifumi and the protagonist, there are no pretenses and rumors.

Spending time with Hifumi is a reserved affair. She plays Shogi with the protagonist, teaching him about strategy. Slowly the two begin to talk and share about themselves, at which point Hifumi’s colder exterior is revealed to be a front hiding an insecure interior.

Surprisingly at one point, this was different, as Hifumi was intended to be a member of the Phantom Thieves that would lend her strategic know-how to the many heists the group pulls off.

Yet, one of the most charming aspects of Hifumi is that she feels separate from the rest of the protagonist’s life. She attends a different school and isn’t constantly around like other party members, making the times you do share with her feel more special.

The relationship between Hifumi and Joker feels slower and gentler than many others. It feels like the two build a mutual respect for each other, while also unexpectedly beginning to rely on the other for emotional support.

Hifumi’s biggest struggle in her life is that her success as a Shogi champion is mostly for the benefit of her mother, who has put her own failed dreams upon Hifumi. While she does have a real love of the game, Hifumi begins to feel resentment and a dislike towards her mother and Shogi. The biggest disappointment comes when Hifumi learns that the accusations of match-rigging are true, as her mother has been ensuring successful matches since Hifumi was a child.

For the majority of this relationship, the Protagonist only gets to know Hifumi as a high school student — he doesn’t reveal himself as the suave thief with a heart of gold that is Joker. Hifumi just likes him for who he is. But upon learning how Hifumi’s mother has put so much pressure on her and rigged matches, the protagonist changes her heart in the Metaverse.

The next time Hifumi plays a professional game of Shogi, she loses for the first time in her life, as her mother has stopped fixing matches. This is the first time Hifumi genuinely feels happy. She just wants to play honestly, and have a real challenge for once.

Persona 5 changed the name of social links in the series to confidants, and Hifumi truly feels like the reason why. As the protagonist, you act as Hifumi’s confidant, and she is yours. In a space without judgment, you two share joy and sadness and learn to love each other.

In the end, Hifumi may not have become a Phantom Thief of Hearts, but she still managed to steal mine.