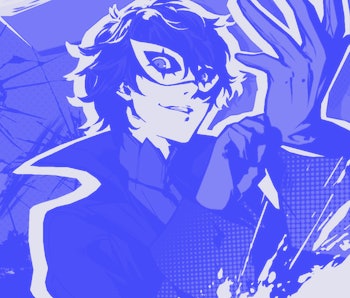 After beating Persona 5 Royal's tutorial section, you’ll be taken to an interrigation room where you’re subjected to illegal police tactics. You’ll be asked to write down your name to sign a paper. This is the part where you can make a funny, fake name like “BigTime CrimeGuy.” Some players might want to further immerse themselves in P5R’s world by using the main character’s “canon” name, as games often have. So what is Joker's real name? The answer's surprisingly complicated, and that's a repeating pattern throughout the Atlus series.

Do Persona protagonists have canon names?

Yes, every Persona protagonist has at least one canon name, but often they’re often quite inconsistent.

Persona 3’s male protagonist was first named Minato Arisato in the P3 manga, which released shortly after the game in 2007. He later gained a different name, Makoto Yuki, for the P3 anime film series that began in 2013. Despite the movie, he was also named Sakuya Shiomi by the P3 stage play in 2014. Of course, Makoto Yuki eventually stuck, appearing as his name in both the movie and 2018’s Persona Dancing spin-off games.

Persona 4’s protagonist had a far less turbulent road to gaining his label. He was first named Souji Seta in the manga that released alongside P4 and then Hayato Asakawa in a 2012 stage play based on P4, but he did gain a permanent name, eventually. He’s been called Yu Narukami in basically every appearance since the 2011 Persona anime. This includes his appearances in the two Persona Arena titles and other games where you cannot name him.

What is the Persona 5 protagonist’s canon name?

As with his predecessors, the Persona 5 protagonist received an initial name via the game’s manga adaptation where he was designated as Akira Kurusu. The manga name meant “a killer kill” with Kira meaning “killer” and Kurusu meaning “kill.” The initial name also had kanji that could be read as "vessel of dawn.”

The protagonist then gained his second canon name, Ren Amamiya, when the anime based on Persona 5 launched in 2018. This name has been since used in most of his other appearances like the 2018 Persona Dancing titles. The kanji used for Ren symbolizes the Buddhist belief of cleansing one's spirit from sin and other ailments. His surname, Amamiya means “Rain Palace,” referencing how it was raining when he first saw Kamoshida’s palace and LeBlanc’s general vibe.

Although every protagonist has a commonly used canon name, many games still opt to label the protagonists by codenames in spin-off appearances, like how the P5 protagonist is named “Joker” in Smash Bros. Ultimate. Presumably, this is done to not take away from fanmade names.

In a December 2019 stage adaptation of Persona 5, Joker’s name was changed every night, gaining nearly 20 names.

While Ren Amamiya is Joker’s most common “canon” name, whatever name you choose for him is an equally worthy contender. Perhaps when Persona 6 finally launches, we’ll get more consistent protagonist naming.