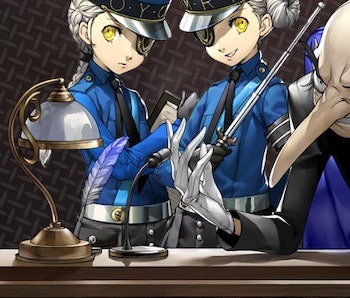 In the opening hours of Persona 5 Royal, you’ll face off against countless enemies in the first two palaces. If you’re finding it all a bit too challenging, it might be time to up your Persona game. You do that by either getting better equipment – possibly through collecting a palace’s Will Seeds – and by improving Joker's aresnal of swappable Personas.

When you start your run through Kamoshida’s palace, there are 3 Personas you should look out for. First, get the level 2 Persona, Jack-o-Lantern.

You’ll encounter them almost immediately after entering Kamoshida’s palace, but you’ll be unable to collect them until far later. Nevertheless, they’re essential to have in your party because of the Agi fire spell and the Rakunda defense debuff, which makes all your attacks hit harder.

When you’re through with Jack-o-Lantern, make sure to itemize them. The electric chair will turn them into a Pumpkin Bomb weapon for Ryuji that has 160 attack. Nothing will outclass its effectiveness for a few dungeons.

If you have unlocked the Velvet Room’s fusion feature, look no further than Obariyion. They’re created by fusing Kelpie with either Cat Sith or Jack-o-Lantern, who can all be found in Kamoshida’s palace.

While Obariyon’s stats may not be the most impressive, they’ll grant you access to some killer techniques. They’ll come packaged with Snap (a medium-damage gun attack) and Sukunda (an evasion debuff), but the real magic comes after you level Obariyon up to level nine. Once you’ve reached level nine, Obariyon will learn Lucky Punch, a low-damage attack with a chance to critical hit nearly any non-boss foe. This means you can use your all-out attacks more frequently in each battle, making Obariyon the perfect way to change the tides when you’re in a losing battle.

If you’ve already passed Kamoshida’s palace and still wish to obtain these persona, all three can be found within Mementos’ first section.

After vanquishing Kamoshida and playing through a bit of Mementos, you officially know your way around Persona 5 Royal. But things are gonna get harder from here on out. There will be tons of new foes in Madarame’s palace, so you’ll have to up your game as well. Kick that off with Makami.

Makami can be obtained in Madarame’s palace. They’re an excellent physical attacker with their skill Double Fangs. Makami will give you an entry into having nuke and ice-based skills, which many foes in Madarame’s palace are weak against. Using Media, they’ll also act as your team healer in absence of Morgana or Ann.

Ippon-Datara is a tanky physical attacker perfect for all-around combat. They have fantastic resistances, being able to repel Wind while being strong against Bless, Curse, and Fire. They’re only weak against Ice, but that’s forgivable provided their other benefits. His move, Sledgehammer, can apply medium physical damage to a foe while having the possibility of inflicting dizzy. They’ll also have quite a few native buffs like Sharp Student, which lowers the likelihood that you’ll get hit by a critical attack.

Matador can only be found via fusion, but boy are they worth it. You can create them by combining the Madarame palace natives Mokoi and the treasure persona Regent. In the early game, Matador will be your ace. They have access to stellar elemental moves like Psi, Magaru, and Agi, which are the Psy, Wind, and Fire elements, respectively.

Matador also uses Swift Strike, letting them hit all foes 3-4 times with light physical damage. It’ll get you out of just about any situation where you’re surrounded by enemy persona. This move won’t be learned by Ryuji until level 32, so having it this early is a huge boon. Matador is also a required persona for Caroline and Justine's confidant link.

When you’re done with a persona, make sure to fuse them into something new, rather than heading out to capture more persona. More often than not, you’ll create something stronger than you expect.

Now you’re ready to head back and battle your heart out for social reform.