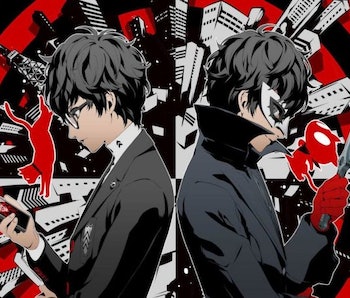 Persona 5 made waves when it first launched on PS4 in 2017, drawing almost universal acclaim for its stylish art style, immersive story, and intricately detailed rendition of modern-day Tokyo. Persona 5 Royal is even better than the original, adding more depth and detail to the relationships between its memorable characters, and making some welcome quality-of-life tweaks. P5's main character, Joker, is a playable character in Super Smash Bros Ultimate, and the brawler sequel, Persona 5 Scramble, will release on Switch sometime later this year. So when is Persona 5 – or better yet, Persona 5 Royal – coming to Nintendo Switch?

Atlus hasn't made any official announcements about a Nintendo version of its sprawling JRPG, but there's still reason to hope it might happen eventually. Here's everything we know about the prospect of taking the Phantom Thieves on the go.

What is the release date for Persona 5 Royal on Nintendo Switch?

There isn’t currently a release date for Persona 5 Royal on Nintendo Switch, but Atlus has regularly implied that it could happen at some point. The publisher recently told fans to "keep fighting" for a port. If that wasn’t enough, Atlus also listed Persona 5 as part o a player survey in early 2020 :

“If previous Atlus games (games which can be played on other hardware, without adding additional elements) were ported to the Nintendo Switch, would you want to play them? Select all of the titles below that you would like to play on the Nintendo Switch.”

Etrian Odyssey, Shin Megami Tensei, Devil Summoner, and Catherine: Full Body were among the other titles on the list.

During a Direct Mini video presentation in late March, Nintendo confirmed Catherine: Full Body will come to the hybrid console on July 7, 2020. The Shin Megami Tensei franchise (of which Persona is a spinoff) is due to come to Nintendo Switch sometime in 2020. Still, we've been waiting a long time for more news about SMT V, which was announced back in 2017. We probably won't see SMT V out west until spring 2021 at the earliest, assuming it launches in Japan in late 2020.

Is there a trailer for Persona 5 Royal on Nintendo Switch?

You wish! In the meantime, you should check out the Catherine: Full Body trailer for Switch. It's a moody, choice-driven visual novel that has a similar atmosphere to Persona 5, but with more adult sexytimes. (Fair warning: this game one isn't for the wee kiddos!)

Which version will come to Nintendo Switch: "vanilla" or Persona 5 Royal?

Were it to exist, the Switch port might be something different entirely. The current chatter surrounding a possible Persona Switch port discourse was spurred by a faulty Best Buy listing released in April 2019. In addition to that, fans discovered an Atlus-owned domain labeled “P5S,” which fans took to be the Switch port. This was later revealed to be Persona 5 Scramble. However, it wouldn’t be surprising if a potential Switch port was P5 Royal with even more additional exclusive content.

Altus recently ported its 2016 Fire Emblem – SMT crossover, Tokyo Mirage Sessions, to Switch, along with new narrative content and skins. If a Persona 5 Switch does happen, we can imagine there would be at least a small sprinkling of new content.

Smash Bros. skins for the entire cast? With Morgana as a Smash Ball or Pikachu? We can dream, right?

Can the Nintendo Switch hardware even handle Persona 5 Royal?

Persona 5 is a massive game with hundreds of hours of gameplay, intricate character models, and environments. Can the Switch, which has less robust hardware than the PS4, handle Persona 5?

The short answer is yes. It shouldn't be a problem at all.

Here's why: Persona 5 first released in 2016 for both PS4 and PS3. The PS3 is far less powerful than the Switch. If that wasn’t enough, the recent Persona 5 Scramble demo seemed to be visually identical on Switch and PS4. That said, there was a significant disparity in load times. The Switch took nearly 50 percent longer to load settings than the PS4.

If Persona 5 doesn’t come to Switch, we’ll just have to see if times change by Persona 6’s release.