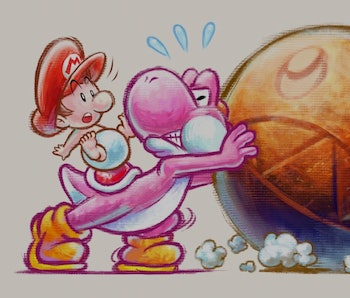 Over the weekend, a massive amount of decades-old Nintendo data was leaked onto the internet, revealing all sorts of shocking information related to retro games like Super Mario World, Yoshi's Island, Super Mario 64, Star Fox, and the early Pokémon games. While this is somewhat fitting for Mario's 35th anniversary, it is not official in any way. Regardless, it still has given fans a ton of insight into never-before-seen development assets for classic Nintendo games.

Starting around July 24, anonymous 4chan users began posting source code and development repositories for more than a dozen Nintendo games from Super NES and Nintendo 64, and because of the sheer volume of files, it seems like they're legitimate. The scale has also led the community to dub the collection "gigaleaks."

If you're a fan of gaming history and preservation or just Nintendo games in general, you owe it to yourself to take a deep dive into some of the revelations included in this massive set of leaks. After digging through several reports and tweets about it all, Inverse has rounded up 5 of the most interesting things to come out of the gigaleak.

Super Mario 64 having a playable Luigi was one of the most prevalent schoolyard rumors for the game back in its heyday, and it turns out there was actually some truth to the myth. Within this massive leak, development files for Luigi were found, shocking many fans who quickly went to work on restoring the file.

As the above tweet from @Axoonium shows, the models have been restored, bringing this longtime urban legend to a close. I guess L is real after all. Hopefully, it doesn't take too long for a fully playable version of Super Mario 64 with Luigi to be created in some way.

Yoshi is one of Mario's most loveable and adorable characters, but these leaks reveal that Nintendo's first draft took awhile to pin down before Super Mario World launched. The first version of Yoshi is lankier and looks more like a genuine dinosaur. Subsequent versions of the model added the character's white belly, shrunk Yoshi in size, and gave him the large and rounded mouth and nose that we are familiar with today.

None of Yoshi's in-progress designs look quite right nowaday, so we appreciate that Nintendo iterated on the design until it became more friendly-looking. You do have to wonder if Yoshi would've been as popular or had as many standalone games if Nintendo had gone with any of the less welcoming or odd-looking in-development design.

Star Fox is one of Nintendo's more underrated franchises that saw its start on the SNES, and its first couple of games were also part of this leak. Early art for the original Star Fox 2 character portraits has emerged, and while Fox McCloud and Falco are recognizable, the other characters are not. One appears to be a horse while the other is a human woman. The human's inclusion is surprising as Star Fox universe only has anthropomorphic animals in it.

It appears that humans were considered for the game at some point during development, though creator Dylan Cuthbert admitted to an inquisitive fan on Twitter that the Star Fox leaks were "all very early on prototype stuff," adding that the team "switched around a ton of stuff" later in the process. Still, this small change could've sent the series in a different direction had it remained.

Several early builds of Yoshi's Island have popped up thanks to these leaks, and one build called Super Donkey is very far removed from the final game. It stars an original character with a large nose that can jump, climb, and spray things. The character's design has been compared to the protagonist of the oft-forgotten Donkey Kong 3, and the title Super Donkey suggests that Yoshi's Island could've been much more Donkey Kong-focused at one point.

Clearly, Super Donkey was massively reworked to become the classic Yoshi's Island while Donkey Kong 3 faded into obscurity. The Super Donkey protagonist was never seen again. This build of Yoshi's Island has never been mentioned by Nintendo before, so finding a "lost" SNES game like this is one of the most exciting parts of the leak.

Video Games Chronicle reports that the leak contained a pitch from Chinese company iQue Ltd (originally responsible for localizing the Nintendo 64 for the region and which might be the source of these leaks) for a Pokémon MMO spanning between the Game Boy Advance and PC. The game would be playable offline or online and would have looked similar to Pokémon FireRed and LeafGreen on GBA; Meanwhile, the PC version of the game would look like Pokémon Colosseum.

According to VGC, this pitch proposed that the Pokémon available to the player would change based on the player's real-world location. We wouldn't see something like this implemented until 2016's Pokémon GO and still haven't gotten a full-fledged Pokémon MMO.

This game appears to never have gotten past the pitching stage and would've probably only come out in China if it did happen, but it's definitely one of the most shocking projects that these leaks have revealed.