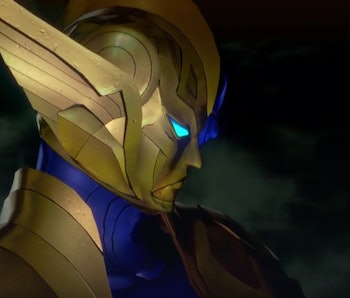 While July 20's Nintendo Direct Mini Partner Showcase was short and a bit underwhelming, it did end with one shocking announcement: Shin Megami Tensei V was finally re-revealed, and we got our first full look at Atlus' RPG for the first time since it was first teased within the same 2017 presentation that unveiled the Nintendo Switch.

"The time for creation has come, follow your will and decide the world’s fate," the Shin Megami Tensei V trailer's official description reads. While this trailer does not show gameplay, it does give us a closer look at the game's story. Demons have overrun the world after the god people worship dies, and it's up to the player to fight back against the demons.

The trailer also confirms that the game is coming out in 2021, more four years after its original announcement and eight years since the new mainline last Shin Megami Tensei game.

As we've mentioned, Shin Megami Tensei V was first teased during a January 2017 press conference that unveiled the Nintendo Switch. Many games shown off in that presentation — such as Super Mario Odyssey, The Legend of Zelda: Breath of the Wild, and Splatoon 2 — came out in the system's first year. Despite being announced during the same presentation, Shin Megami Tensei V has only received one teaser trailer and a couple of mentions in passing by Atlus since.

Shin Megami Tensei had been a pretty major franchise for Nintendo systems with roots going all the way back to the NES (known as the Famicom in Japan) in 1987. While the series has never gone mainstream in North America, one of its spin-off franchises has: Persona. If you've been wishing that Persona 5 might come to Nintendo Switch, Shin Megami Tensei V should scratch that itch, even if some of the gameplay mechanics are a bit different.

The Inverse Analysis — While I was disappointed by the short Nintendo Direct Mini presentation, I am happy to finally see Shin Megami Tensei V in action again. Now that we have a better idea of the game's setting and story, I'm getting hyped for the game all over again. The simultaneous worldwide release is also welcome for western fans, who typically have to wait several months for localization of Atlus games.

Now that Shin Megami Tensei V has re-emerged, I'm looking forward to seeing some gameplay in action. Hopefully, Atlus will start to discuss this game more in the coming months and not just go silent on it again. Even if they do, I can take solace in the fact that Shin Megami Tensei's release will finally give that January 2017 presentation some closure. Now we just need Metroid Prime 4 to finally be released.

Shin Megami Tensei V will be released for Nintendo Switch in 2021.